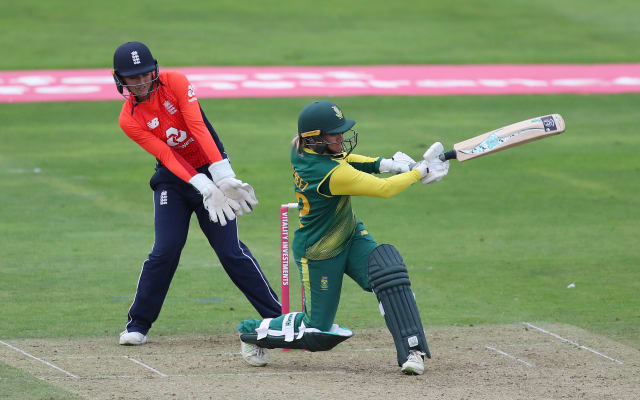 Du Preez eased her side over the line with two balls to spare to clinch a six-wicket victory after they had been set 124 to win in Perth.

Natalie Sciver had earlier made 50 from 41 balls after England had been put in by Dane Van Niekerk, but although they came close to defending their total of 123 for eight, a six and a four in Katherine Brunt’s final over ended their hopes of a successful start to the campaign.

They got off to a promising start with Amy Jones having reached 23 from 20 balls when she attempted to hit Marizanne Kapp down the ground and lofted a simple catch to mid-off.

Fellow opener Danni Wyatt followed three balls later when she slashed a full toss from Ayabonga Khaka straight to point, and it became 43 for three from 8.2 overs when skipper Heather Knight was impressively caught in the deep by Shabnim Ismail off Van Niekerk.

Sciver and Fran Wilson, after an uncertain start, briefly steadied the ship, but Wilson succumbed to the same combination for 14 with the score on 72 and Brunt followed for nine to make it 104 for five.

Sciver reached 50 off the the final ball of the 18th over but lost her off-stump to the first of the 19th, a slower delivery from Khaka, soon to be followed by Lauren Winfield as Khaka finished with three for 25.

South Africa’s response was stuttering as opener Lizelle Lee holed out to Winfield off Anya Shrubsole for four, although a towering six from Van Niekerk eased the nerves as she and Kapp started to pick the gaps in the field.

They had reached 90 for one when England finally made an impression, Kapp offering a return catch to Sarah Glenn for 38 before Van Niekerk fell to Sophie Ecclestone for 46 without a run being added.

Ecclestone bowled Tryon with the final delivery of the 19th over after being hit for six by her two balls earlier, but another maximum and a four from Du Preez saw South Africa to a first victory over England on the world stage.