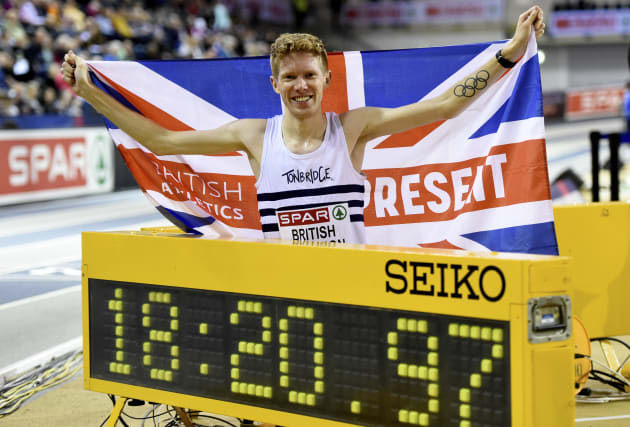 Tom Bosworth threw down the gauntlet to his Olympic rivals after setting a new British record in Glasgow on Sunday.

The 30-year-old defended his 5000m race walk title at the British Indoor Championships.

He clocked a new record of 18 minutes 20.97 seconds at the Emirates Arena – eight seconds ahead of his own previous record.

Bosworth was disqualified at the 2017 World Championships and came seventh in Doha last year, while he has struggled with a back injury and mental health problems after his disappointment in London in 2017.

He will take time out of the sport after the Olympics but believes he set an early marker ahead of the Games in Tokyo in the summer.

“Massively. That’s got to be one of the fastest times for the last 10 years,” said Bosworth.

“The last couple of years since the Commonwealths have been a mess on and off the track and every time I’ve stepped on the track, it’s not gone to plan.

“I didn’t want to say anything before today because I’ve had the best winter I’ve ever had.

“I’m the happiest and healthiest I’ve ever been. It’s easy to nail it when home life is good and you are enjoying it again.

“Everyone knows my previous results, I know I should be top eight in every championships I go to.”

Earlier, defending champion Morgan Lake came second in the high jump as she lost out to Bethan Partridge.

The 29-year-old cleared 1.87m to beat Lake, who has struggled to find top form in the last six months and had three failures at 1.87m having jumped 1.84m.

She failed to reach the high jump final at last year’s World Championships and previously vowed to avoid a dramatic loss of form this year having equalled the British indoor record of 1.97m 13 months ago.

“I don’t know what went wrong. I don’t really have any words to sum up how awful that was,” she said.

Jessie Knight, still combining her training with her work as a teacher, won the 400m in 52.76secs.

Amelia Strickler won the shot put with a huge personal best of 17.97m, beating Sophie McKinna – who took the title ahead of her last year.

Strickler said: “The indoor season is different this year because there’s no World Indoors but I wanted to come here and throw an indoor personal best but I bettered it with a lifetime best so I can’t complain.

“Getting the win as well makes it even sweeter.”