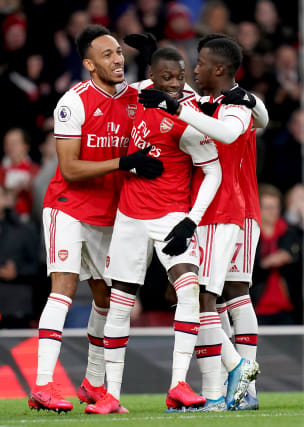 Pierre-Emerick Aubameyang struck twice as Arsenal recovered from an early setback to beat Everton in a thrilling five-goal clash.

The visitors led inside 49 seconds as Dominic Calvert-Lewin’s effort became the quickest home goal ever conceded by Arsenal in the Premier League.

But Eddie Nketiah would level for the Gunners before Aubameyang struck either side of a Richarlison goal to hand Arsenal a 3-2 win and their first back-to-back league victories since the opening two games of the campaign.

Mikel Arteta’s reign as Arsenal boss has so far brought about improvements in defence but his side were sloppy here and relied on some fine finishing at the other end of the pitch to lift themselves above Everton and up to ninth.

A quirk of the winter break meant this was Everton’s first game in 15 days and Arsenal’s third of the week.

That may be the reason the Toffees took a shock lead as David Luiz lost the flight of a Gylfi Sigurdsson free-kick, the ball cannoning off his shoulder with Calvert-Lewin finishing acrobatically to stun the Emirates Stadium.

Arsenal looked to respond quickly but Hector Bellerin could only fire high over the bar after being played in by Nicolas Pepe.

In their attempts to peg Everton back, Arsenal were already committing extra bodies forward and they were almost caught out as Richarlison fed former Gunner Alex Iwobi, who arrowed a shot just over Bernd Leno’s crossbar.

Things went from bad to worse as Arsenal soon lost Sead Kolasinac to injury following a nasty fall, Bukayo Saka coming on at left-back in his place.

The 18-year-old winger has reverted to defence in recent months but his tendencies as an attacking player remain and he provided his third assist of the week, crossing for Nketiah to turn home an instinctive finish to level the game before the half-hour mark.

Six minutes later and Arsenal were ahead, Luiz with an inch-perfect pass to split the Everton defence and find the run of Aubameyang, who made no mistake in notching his 18th goal of the season to turn the tables.

A flashpoint at the start of stoppage time saw Richarlison booked for a late challenge on Dani Ceballos, with plenty of those in red claiming the Brazil international should have been sent off.

Instead, just moments later, he was equalising for Everton as he got the lightest of flicks to Yerry Mina’s header to knock the ball past Leno and over the line.

Remarkably, the second half started quicker than the first, Pepe crossing for Aubameyang to head Arsenal back in front just 25 seconds after referee Stuart Attwell got the action back under way.

Calvert-Lewin should have buried his second of the afternoon after being picked out by Richarlison’s knock-down but Leno stood tall and kept out his close-range strike as Everton continued to push on.

Ceballos then came close at the other end, curling a shot wide after good work from Mesut Ozil had teed up the Spaniard.

With action at both ends, Leno once again did well to keep out Richarlison before Calvert-Lewin failed to get anything on his team-mate’s cross.

Arteta introduced Lucas Torreira and Matteo Guendouzi to add steel to his side as they looked to stem the tide but it was in front of goal where Nketiah almost delivered the killer blow, cracking the underside of the crossbar after fine pressing work saw Granit Xhaka nick the ball on the edge of the Everton box.

Calvert-Lewin headed a fine chance wide after Arsenal switched off for a short corner while substitute Moise Kean flashed a shot past Leno’s post as Arteta’s men survived to claim their third win in a week.