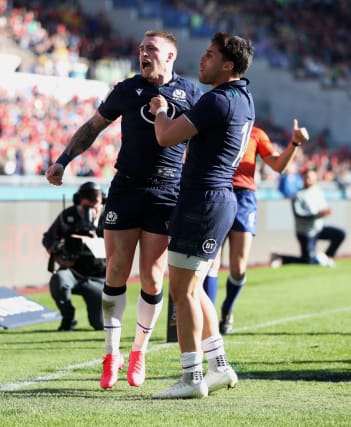 Stuart Hogg believes Scotland are back on track after finally picking up his first win as skipper.

The full-back gave Gregor Townsend’s under-pressure side the spark they needed after back-to-back defeats when scored his 20th Test try against Italy with a stunning solo run in Rome.

That set the Dark Blues on their way to a 17-0 win, with Chris Harris and Adam Hastings also crossing over at the Stadio Olimpico.

It was far from a perfect display – with the sloppy Scots wasting three gilt-edged chances to punish the Azzurri further – but Hogg was not complaining after seeing his team pick up their first Guinness Six Nations win in over a year.

It was also the new captain’s maiden victory following three previous failed attempts and made all the sweeter after he was guilty of horror mistakes against Ireland and England.

But the 27-year-old is now looking to double his tally when Grand Slam contenders France visit Murrayfield in two weeks’ time.

“I believed in the boys from the very beginning and believed that we could get wins in Test matches,” said the Exeter full-back.

“We hadn’t performed the way we wanted to in the first couple of games. But the exciting thing is we can get better. This group is now hopefully on track.

“It’s a huge confidence boost and we’ll kick on now.

“The challenge is to take it on to France. We’ll enjoy the win but we need to carry it on into the France game – and we’ll work very hard to do that.

“There’s a hell of a lot of talent in there and we can execute. I’m proud of their efforts.”

Scotland were on a two-game scoring drought when Hogg picked up a loose kick in centre field with 22 minutes gone.

With Italy stretched, he did not hang about – darting through a gap in the hosts’ line before striding away to score in the corner.

There was no danger of a repeat of his earlier spills in this championship and from there, Scotland did not look back.

Harris barged over six minutes into the second half after 17 phases of sheer Scottish grunt, while Hastings put a shine on the win late on.

Hogg said: “My try was very pleasing because it’s something we’ve worked on.

“There is a lot of method in the madness and thankfully we managed to come up against an unstructured defence.

“That’s when me and the other guys in the back three come alive. Thankfully it paid off.

“However, I do think we need to show more patience at times. The attack structure is there and we have players to get us into these positions.

“At times we just go a wee bit too early to try to score – and cough up the ball.

“When we’re patient and go through the phases as we did with the Chris Harris try, that was us in control. We were calm, composed and came away with the five points.

“It’s a lot easier to speaking to the boys in the huddle after a victory. I said after the game that it wasn’t perfect – but nothing ever is perfect.

“Our attitude was spot on and the excitement can build, because we can get better.

“This is just the beginning. We’re going to get better and better. And we’re going to enjoy doing it, as well.”

The win relieves some of the pressure from Townsend but the head coach was just pleased to see Hogg get off the mark.

He said: “Stuart scored a world-class try and he looked lively at times when he was almost through. He now celebrates his first win as captain.”