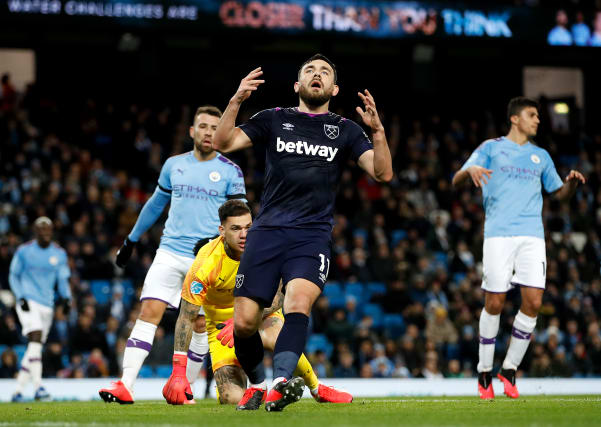 David Moyes has launched a staunch defence of his tactics at Manchester City as West Ham prepare for another backs-to-the-wall encounter.

Some Hammers fans were dismayed at Moyes’ team selection on Wednesday night, a line-up seemingly with damage limitation in mind consisting of five at the back, four in midfield and Michail Antonio in attack on his own.

Meanwhile more than £100million worth of talent, including Felipe Anderson, Manuel Lanzini and record signing Sebastien Haller, kicked their heels on the bench.

An underwhelming 2-0 defeat left some of the travelling support wondering why they had bothered making the long midweek trip for the rearranged fixture.

But Moyes is likely to serve up more of the same when his relegation-threatened side head to runaway leaders Liverpool on Monday night.

The Hammers boss said: “The message to the ones who travelled up was thanks very much for coming to the game, which had been rearranged and was not easy to get to. They were terrific and we appreciate them.

“But I think the real supporters understand how difficult the games are. They understand that the two games we have in this period are very hard.

“In the main many of the supporters I have spoken to have been very supportive and really understanding.

“We went there hoping to get something from the game. We’ve tried other formations and other players that haven’t worked either. We’re trying to find situations and look for situations that will help us.”

West Ham will travel to Anfield rooted in the bottom three, in the midst of a third relegation scrap in four years.

Moyes saved them from the drop two seasons ago, but he insists mere survival should not be viewed as a triumph at a club with far loftier aspirations.

“I’ve never classed staying up at any club a success and I never will. And certainly not a club the size in West Ham,” he added.