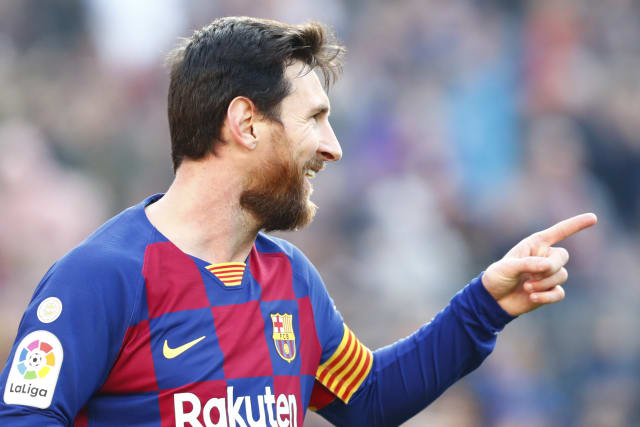 Four goals from Lionel Messi sent Barcelona to the top of LaLiga as they eased to a 5-0 victory over Eibar at the Nou Camp.

The reigning champions wasted little time claiming the lead as a 14th-minute Messi strike left them a goal to the good before a quickfire double from the captain widened that margin going into the break.

A rallying Eibar failed to profit from a handful of second-half chances before their fate was irreparably sealed by a fourth Messi goal and a last-minute strike from Arthur, with recent emergency signing Martin Braithwaite also making his debut from the bench and a late impact on the game.

The victory sees the club push to the head of the table, with long-time rivals Real Madrid demoted to second ahead of their visit to Levante on Saturday night.

Eibar looked to have taken an early lead just six minutes after kick-off, which was delayed while an issue with the VAR system was rectified.

Striker Sergi Enrich connected with a Jose Angel cross to head the ball beyond Marc-Andre Ter Stegen, but the flag was raised and the effort was disallowed.

The near-miss seemed to galvanise Barca, particularly Messi who responded by launching an attacking run before cutting back and finding no one was in a position to capitalise on his efforts.

The Argentinian pushed forward again in the 14th minute, collecting the ball from Ivan Rakitic and outmanoeuvring three Eibar defenders before chipping over Marko Dmitrovic to hand his side the lead.

A spell of Barca dominance followed and was only interrupted when the visitors gained possession in the 30th minute, with Gonzalo Escalant surging forward into the box and attempting a half-volley that travelled over the cross bar and left Ter Stegen untroubled.

The hosts quickly reasserted their dominance over the game, however, with Messi launching another one-man attack in the 37th minute, cutting through a helpless Eibar defence and slotting the ball in the far corner to widen Barca’s lead.

Eibar were offered no respite as Messi struck again just three minutes later, this time firing at close range after the visitor’s defence fumbled the ball inside the box.

Dmitrovic then blocked a quickfire double of Barca efforts, with Antoine Griezmann and then Sergio Busquets attempting to make it 4-0 before half-time.

Griezmann was brought down by the Eibar keeper minutes later, but a VAR check did not deem it worthy of a Barcelona penalty and the scoreline remained 3-0 at the interval.

The Barcelona onslaught resumed as the second half began and Dmitrovic was required to make an impressive save after Rakitic collected a Griezmann cross and fired towards the back post.

Eibar were thrown a lifeline after 63 minutes when an Angel free-kick threatened to curve into Ter Stegen’s goal, but the German keeper reached out and was able to push the ball wide.

A second shot at redemption presented itself two minutes later when a blundering interception from Gerard Pique saw him inadvertently tap the ball into his own goal.

Escalante’s high-footed clash with the centre back in the run-up earned him a yellow card, however, and the own goal was disallowed.

Another two disallowed efforts followed in the latter stages of the game, with Pique’s replacement Samuel Umtiti appearing to score a fourth for Barca before his effort was struck off as the Frenchman was deemed offside.

Artuto Vidal also provided another void effort as he too was judged to have been offside when shooting past Dmitrovic in the 81st minute.

Messi then returned for his fourth goal when connecting with a Braithwaite ball after 87 minutes to extend his side’s lead and provide the new arrival with his first assist for the club.

With the game as good as won for the hosts, Braithwaite then pushed for a goal on his debut, but when his effort was blocked by Dmitrovic it was Arthur who converted the rebound to seal a 5-0 runaway victory for Barca.