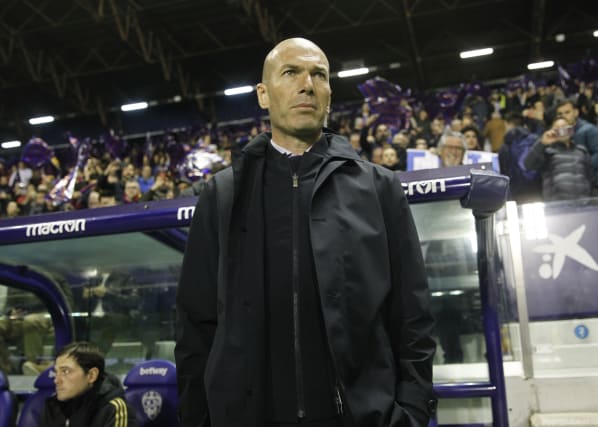 Real Madrid coach Zinedine Zidane was left counting the cost of a 1-0 defeat to Levante as Eden Hazard was forced off after taking another blow on his ankle.

Los Blancos had seen Barcelona move above them at the top of LaLiga on Saturday with a 5-0 thrashing of Eibar.

A stunning strike from Levante captain Jose Luis Morales with just 11 minutes left proved enough to settle matters at Ciutat de Valencia, where Hazard limped off during the second half.

The Belgian summer signing had been sidelined since late November after being injured against Paris St Germain in the Champions League group stages.

Hazard, who made a welcome return to action in the 2-2 draw against Celta Vigo last weekend, received ice treatment to his ankle when sitting on the bench following his substitution after 67 minutes.

Real Madrid will now fully assess the problem, but Zidane fears the worst as the club prepare for a Champions League clash against Manchester City on Wednesday night followed by hosting El Clasico.

“It doesn’t look good because he has been hurt where he was injured,” Zidane told a press conference, as reported by the club. “It is a blow, but let’s see if it’s a small thing.

“Now he is in pain and we will see tomorrow, when we will do more tests.”

Zidane felt Real Madrid had been unfortunate not to get something from Saturday’s match, the result leaving them two points behind in the title race and ending their 15-game unbeaten league run.

“We played well during the first half, and the goal was the only thing we missed, but it is the most important thing in football,” he said.

“In the second half, they had one chance and scored. Football is tough because in two matches now, we have lost five points.

“Next week is when we are playing for everything. We have to rest up and focus on the week to come. We have to take all the good that we have done so far and go back to winning.”

Zidane added: “We had very good moments this season and we must not lower our arms because of these two games.

“We have to think that this can be carried forward, with courage and energy and this is football.”

Zidane is determined to tackle two very testing challenges one at a time.

“We will do everything possible to return to the top of LaLiga – but first we have a game on Wednesday,” he said. “We know the importance of these two matches.”

Levante had lost five of their last six league fixtures, but can now add Real Madrid’s scalp to the 3-1 home victory over Barcelona at the start of November.

“It is not easy to win against the two greats, Barca and Madrid, in one season. I think we have to have more faith in this team,” Levante coach Paco Lopez said at a press conference.

“We are the Levante and we just need to get more from us than they did. It was a game to suffer. The effort has to be maximum, and the team has been tremendous.

“In order to beat them, all the circumstances have to happen, be right – and then they don’t have their day.”