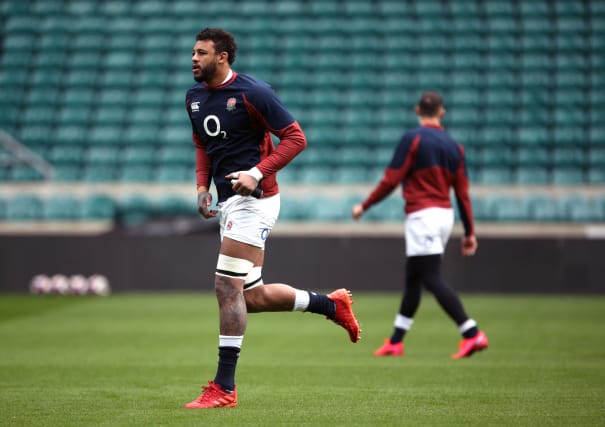 Courtney Lawes was nursing an ugly shiner as he promised Ireland a ferocious battle up-front when England look to accelerate their Guinness Six Nations pursuit on Sunday.

Lawes’ right eye was almost shut due to extensive bruising sustained during a collision in training on Thursday, but the Northampton lock-cum-flanker insists he will be ready for a pivotal clash at Twickenham.

“It’s just a boo boo! Nothing too crazy. It’s all fine, just a clash, my head on something, not sure what,” Lawes said at the eve-of-match captain’s run press conference.

“I’m hoping it will go down a bit by tomorrow. It’s all right – I got through today so I was all right.”

Ireland are chasing the Grand Slam after accumulating wins against Scotland and Wales, but England amassed 89 points in two emphatic victories over their old rivals last year.

“We’re expecting a pretty physical battle. Up front they have got a really good pack, a big pack, so that is a big area for us to front up and show we want it,” Lawes said.

“We want to get out there and get at them. I’m really looking forward to it. Playing at Twickenham can be a big advantage, but it can also turn against you if you don’t get it quite right. It is what you make of it.”

An intriguing sub-text to the round three fixture is the father-son dynamic that sees Ireland head coach Andy Farrell look to put the shackles on his son Owen, England’s captain and most influential player.

“Owen has not spoken about coming up against Andy too much. Owen is just a competitive person,” Lawes said.

“No matter what game it is, he’ll do everything to win and it’s infectious and good for the team.

“We obviously really enjoy him being our captain – he leads by example and he leads with his words. No matter who we play he wants to win.”

Lawes turns 31 on Sunday when he will also have the distinction of equalling Martin Johnson’s mark of 84 caps – the England record for a second row. It was Johnson who gave him his debut in 2009.

Complicating the milestone is that Lawes has made double-digit appearances as a blindside flanker.

“I remember Courtney when he first came into the England squad and the way he carried, hit and the force he was at the line-out,” said Steve Borthwick, who was captain for his Test debut.

“To still be doing it at this level as long as he has is testament to him and how hard he has worked on the field, but more importantly off the field to make sure that his body is in the best condition to play at the elite level every week.

“I hope there are going to be many more years of him representing England. As an England coach and supporter, it’s great to see a player who plays with such passion, determination and ferocity.”