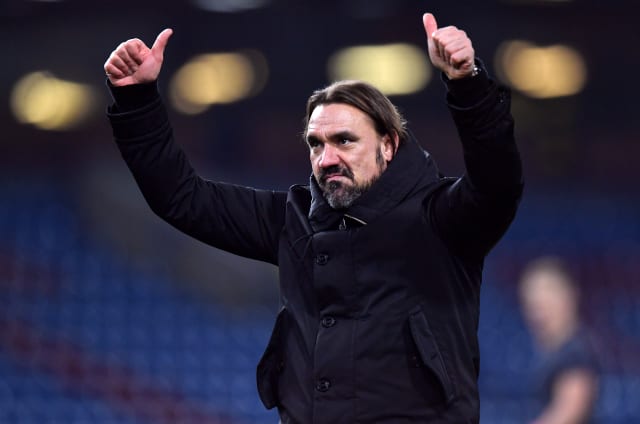 Norwich head coach Daniel Farke insists his side will not raise the white flag and surrender their Premier League status as they battle against the odds to stay up.

The Canaries are in danger of being cast adrift at the foot of the table, currently lying seven points from safety heading into the weekend’s fixtures.

Farke, though, continues to stay positive for the run-in – with his squad lifted by a battling performance in last weekend’s 1-0 defeat to runaway leaders Liverpool as they prepare for Sunday’s trip to Wolves.

“We don’t want to speak about next season right now because we haven’t raised the white flag,” said Farke, who confirmed full-back Sam Byram is set to miss the rest of the campaign following hamstring surgery.

“We are focused on what we have to do right now – on the Wolves game.

“Our main topic is to be as successful as we can in the next few weeks. The other topics aren’t that important.”

Farke, whose team have picked up 18 points from 26 games this season, added at a press conference reported by the club: “We know we need to come as close as possible to 40 points.

“It is a huge task because we are in the worst position and need to win more points than all our competitors, but it’s still in our hands.

“We don’t have to look to other fixtures and pray for results, just to be concentrated on our games.”

Just as Norwich did last season, Wolves secured promotion back to the top flight as winners of the Sky Bet Championship in 2018.

Nuno Espirito Santo’s side, though, have not struggled to hold their own since – and again impressed with a 4-0 win over Espanyol in the Europa League on Thursday night.

Farke, however, maintains recent away performances have shown Norwich can be competitive.

“We are definitely on the right path and in terms of results, a 1-0 loss against Liverpool isn’t the end of the world,” he said.

“When I judge our last away games, we had a top performance at Tottenham, a win at Burnley (in the FA Cup), and a clean sheet at Newcastle, so they have been quite good in recent weeks.

“If we can go on like this, we will have a chance in every game to add points.

“If we are capable of doing that, we have a chance to collect enough points to earn the right to stay in this league.”

Farke, though, is confident Northern Ireland international Jamal Lewis can slot back into the side to cover the loss of Byram, who was forced off during the first half against Liverpool.

“It is not good to lose Sam, but I have to compliment Jamal,” Farke said. “He has been really top class in training, but I couldn’t bring him in.

“Jamal stayed mentally strong and prepared his body for this situation.”