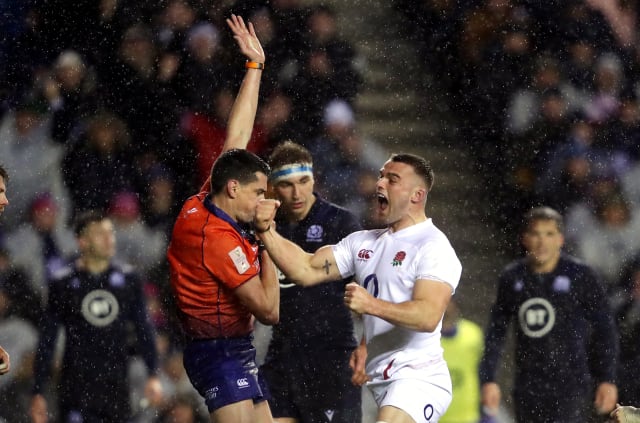 Ben Earl has emerged as Eddie Jones’ latest hybrid experiment after being picked as a multi-role replacement for Sunday’s Guinness Six Nations clash with Ireland at Twickenham.

Earl will supply back-row and three-quarter cover for a game England must win if they are to remain in title contention after being picked on a bench that shows a six-two split between forwards and backs for a second successive match.

In a curious team selection, Jones has named five locks across the 23-man squad, given Jonathan Joseph his first start on the wing and restored Elliot Daly at full-back, thereby revisiting an experiment that had previously been abandoned.

But Earl’s presence is the most intriguing with the 22-year-old Saracen set to win his second cap having made his debut against Scotland a fortnight ago.

Jones previously saw wing Jack Nowell as a player who could also cover flanker, but the tackle-busting Exeter Chief has rarely been fit and misses the entire 2020 Six Nations because of an ankle injury.

Now Earl, whose presence comes at the cost of Lewis Ludlam’s demotion, is seen as having the athleticism and ability to provide additional flexibility.

“Ben is on the rise at the moment. Lewis has probably flattened out a little bit but that’s common with young players,” Jones said.

“His debut against Scotland was positive. Very positive. A lot of dynamism.”

Jones is happy that his revamped back three are ready for the aerial bombardment and acrobatics awaiting in the round-three game at Twickenham.

Daly was exposed under the high ball during his most recent outing at full-back in last autumn’s World Cup final, but George Furbank’s mysterious groin injury created a vacancy in the position.

Jones initially stated that Furbank would not be risked because of the long-standing medical issue, yet the 23-year-old will be at Twickenham in the capacity of reserve.

And although Ollie Thorley is available and is a specialist wing, Joseph gets the nod out wide.

“Elliot has played a lot of Test football at 15, so he welcomes the opportunity. We don’t feel he has got a deficiency (under the high ball),” Jones said.

“Jonathan is one of our best defenders in space, competent under the high ball and has great running skills. With the resources we have available he’s the best guy for that spot.

“Ollie’s progressing well. He’s still got some work to do on his game before he’s ready, but we’re in the process of getting him ready to play Test rugby.”

The unprecedented array of second rows – Courtney Lawes returns at blindside flanker while Joe Launchbury and Charlie Ewels cover for Maro Itoje and George Kruis – is born out of necessity, according to Jones.

“The forecast is for it to be wet and rainy and it is going to be an attritional game,” the Australian said.

“Coming back from the World Cup where we played some really good rugby, we got caught against France probably assuming that part of that was going to continue.

“We’re into the third game now – it’s a whole different game. The contest is hard, there’s less space, the conditions are difficult so at the moment six-two suits us.”

Manu Tuilagi recovers from a groin strain to return at outside centre while Henry Slade is picked on the bench having overcome an ankle problem.