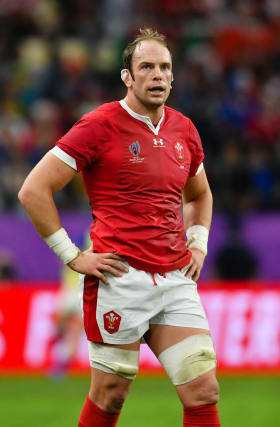 The build-up has seen both sides not holding back, with Jones’ namesake, Wales prop Wyn Jones, saying he expected the French forwards to “hit and chase and cheat” in a bid for scrummaging supremacy.

France head coach Fabien Galthie then responded to Jones’ comments by claiming they demonstrated a lack of respect for the French nation, and there was “no room for these kind of remarks” in the Six Nations.

Les Bleus team manager Raphael Ibanez, meanwhile, bizarrely criticised Wales for their handling of fly-half Dan Biggar, who failed a head injury assessment in the defeat against Ireland two weeks ago but starts on Saturday after passing all return-to-play protocols.

All Biggar’s testing was undertaken with the addition of a globally renowned concussion expert reviewing his return, which was proactively sought by the Welsh Rugby Union’s medical team.

Asked for his reaction to the scrummaging furore, Alun Wyn Jones said: “It’s funny, I think the tone, context and language used can sometimes be ill-perceived.

“I wasn’t at the press conference but I think it may have fuelled the fire for some. They are not my words. If anything, it’s completely the other way – the words were borne out of respect for what French rugby has been about for many, many years, which is a dominant pack and flair behind.

“It’s probably borne more out of respect than a lack of but that’s my perception.

“Ultimately, we just want to conform to the laws and they are adjudicated accordingly.

“But hopefully, the game and the occasion is what we’re talking about after the game.”

Quizzed on Ibanez’s Biggar comments, Jones added: “I’m not a doctor so I couldn’t answer any medical questions.

“But it’s interesting he (Ibanez) says that because Prav (WRU national medical manager Prav Mathema) was with him (Ibanez) for two years at Wasps, so I’m sure they will have a conversation regarding that after the game.

“But I’m not here to answer any medical questions. If he (Biggar) has been deemed fit, then I am assuming he’s fit for the people who make those decisions.”

Jones will lead out a team boasting a Six Nations record 859 caps this weekend, and it is a game Wales must win to keep alive title hopes.

France and Ireland are the only remaining unbeaten teams left in this season’s competition, but Les Bleus have not win a Six Nations game in Cardiff since 2010.

“Sometimes, you go away and people talk about pressure, but I think there’s more pressure from playing at home because that expectancy is there,” Jones said.

“Irrelevant to what we have or haven’t done, there is always that expectancy when you are playing on your home ground, and that’s no different tomorrow.

“We were well aware of the exciting French squad that was announced before the campaign and they’ve backed that up with their first two performances.

“You would like to hopefully think that some of the experience we have, it’s served us well in those tight games, but it is a new French side, a new outlook, a new coaching set-up.

“The fact we’re at home, we don’t want to think or rely on a home advantage, but ultimately the message will be stick to the process.”