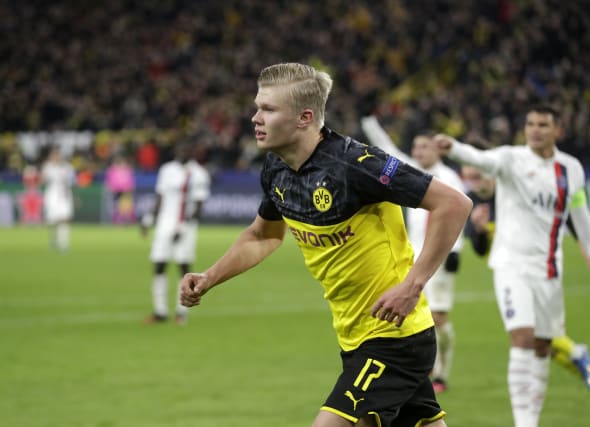 Erling Haaland’s double against Paris St Germain on Tuesday made him the fastest man to 10 Champions League goals – but how does he compare to the competition’s other leading scorers?

Here, the PA news agency looks at the record for each 10-goal landmark and how Haaland measures up against that player.

The Norwegian scored eight goals in Salzburg’s six Group E games, including a hat-trick against Genk and two in defeat to Napoli. New regulations mean he is not cup-tied after his January move to Dortmund, and he scored both goals in the 2-1 win over PSG to become the first teenager to score 10 goals in a Champions League season – and only the second, after Kylian Mbappe, to reach double figures in the competition.

Kane beat Alessandro Del Piero’s long-standing record of 26 games with two goals against Olympiakos last season, his fourth Champions League brace to go with a hat-trick against APOEL in 2017. His 12 games to reach double figures had been bettered only by Liverpool pair Roberto Firmino and Sadio Mane and former Inter Milan frontman Adriano until Haaland rewrote the record books.

The Dutchman reached double figures in a still-impressive 15 games, but it is in the middle range of the records that he dominates – Haaland will have to keep up his scoring form for years to come to match Van Nistelrooy’s records.

Messi closes within four, with 51 in 66 games, before taking top billing himself.

A group-stage game against Ajax in 2013 brought Messi the record in style, with a hat-trick taking him to 62 Champions League goals. His first 10 had come at a pedestrian rate, although at a young age even considering Haaland’s exploits.

Ajax were again the victims, this time with a Messi brace.

A fifth Champions League hat-trick, against APOEL, helped Messi to his next landmark…

…and a sixth and seventh followed against Celtic and Manchester City as he reached 90 with a Haaland-esque 10 in seven games.

A last-16 double against Chelsea made the Argentinian the second – but quickest – man to a Champions League century.

Cristiano Ronaldo had long since surpassed him as the competition’s leading scorer, but Messi was holding him off on a goals-per-game basis.

Three goals across the two legs of Real Madrid’s 2018 quarter-final against Juventus – his last Champions League goals before joining the Nerazzurri – made Ronaldo the first man to reach 120 goals in the competition, with Messi still on exactly 100 at that stage. The Portugal forward’s acceleration has been remarkable after taking 37 goals to score his first 10.