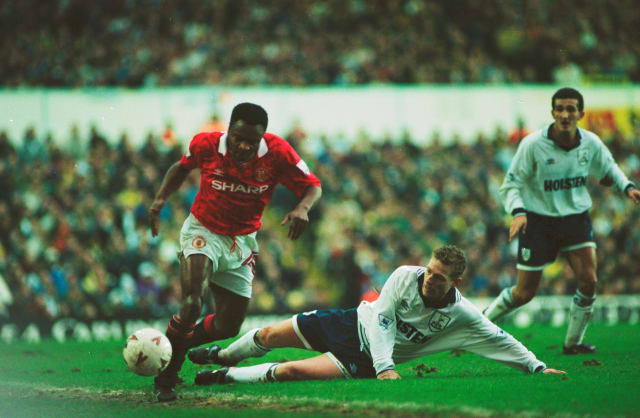 Former England defender Paul Parker believes players should stand their ground and not walk off the pitch if they are subjected to racist abuse from the terraces.

Porto striker Moussa Marega was restrained by team-mates and opposition players as he reacted angrily to apparent monkey chants from Vitoria Guimaraes fans after scoring against his former club on Sunday.

Marega attempted to make a stand by leaving the pitch, gesturing to the home fans en route and was eventually substituted amid jeers from the stands.

Following the Primeira Liga clash, Marega took to social media to hit out at the "idiots" involved from the section of the home support and also at the match officials for not "defending" him.

"People want to shout about it and keep doing it, but maybe I am old school – you don't give them anything, you don't let them even know that you are remotely bothered, because these people are better off without any attention," Parker told the PA news agency.

Asked whether players should walk off if subjected to racist abuse, Parker said: "Not in a million years. I think that is absolutely terrible.

"It recently just happened in a game (in Portugal). People are having a go at the players who are stopping him coming off.

"I would say 99 per cent of them are saying: 'don't give those people a reason for you to walk off'. Because I think if that one person walks off and it affects the game, then football will collapse.

"It gives everybody an excuse – footballers love an excuse and if the crowd believe they can do something to affect a game, then they are going to do it."

Parker came through the ranks at Fulham in the early 1980s before going on to play for QPR and then moving to Manchester United, where he won the Premier League twice as well as the 1994 FA Cup.

The 55-year-old recalled: "When I was playing, and the abuse you got, never did it ever cross my mind to walk off the pitch.

"What you find is they go quiet, some will be even more honest, come out to say 'well done', and they will move on.

"It is no different in life – never show anybody you are hurt."

"Apart from my family, Football to Amsterdam is my biggest individual achievement"

Who's joining us this June? 🙋 Last chance to sign up 👇 https://t.co/3F2lUcduiOpic.twitter.com/MdJvwY7inq

Parker will be taking part in Prostate Cancer UK's Football to Amsterdam bike ride from June 5 to 7.

The former England defender is looking forward to getting back in the saddle again to tackle the 145 miles and help push the cumulative fundraising total towards £3million.

"Being involved in it last year, I realised it was not just a bike ride, it was a place to meet and chat – and then you get involved in the conversations with people about their experiences," said Parker.

"Prostate Cancer UK is a terrific cause and is making huge strides in football and beyond. Events like Football to Amsterdam are playing a massive part in driving change for men, but there's still a lot of work to be done."

:: For more information about taking part in Football to Amsterdam 2020, go to prostatecanceruk.org/amsterdam and to sponsor Paul, visit https://www.justgiving.com/fundraising/paulparkerf2a