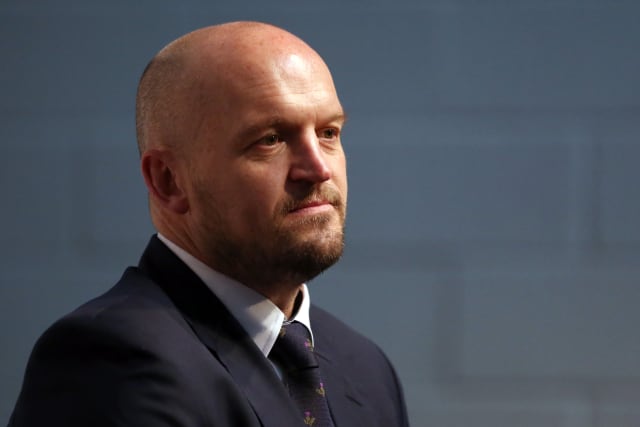 Gregor Townsend says there has be no fresh talks with Finn Russell as his stand off with the Scotland talisman continues.

Russell has missed the Dark Blues’ opening two Guinness Six Nations clashes so far this year and will again be absent when Townsend’s team run out in Rome for Saturday’s showdown with Italy.

The row was initially sparked by allegations of a late-night drinking session which breached team rules but has since developed into a debate over the Racing 92 star’s relationship with his head coach and his place in the team’s decision-making structure.

Russell cast his international future into major doubt the day after the Scots’ 16-9 defeat by England when he gave an interview with the Sunday Times detailing the extent of the breakdown of his partnership with his former Glasgow boss, insisting: “There’s no relationship, we don’t work at all together.”

Townsend responded the following day with a flurry of statements and interviews in which he made it clear Russell would only be welcomed back if the fly-half agreed to sign up to the team’s new standards of behaviour.

Now Townsend says there has been no further developments to the status quo in the nine days that have followed.

And the Scotland head coach declined to discuss the impasse further as he insisted his focus is on preparing the players he does have available for the Azzurri.

Asked if he had spoken with Russell since he made his public response to the Sunday Times, Townsend told a press conference: “Since we spoke to you, probably not, no.

“We’re obviously focused on the 23 going out this weekend. He’s not in that so I’d prefer to focus on that 23.”

While Russell remains in Paris, Edinburgh forwards Stuart McInally and Ben Toolis and Gloucester centre Chris Harris have been welcomed back into the staring XV for this weekend’s run out at the Stadio Olimpico.

Hooker McInally swaps places with Glasgow’s Fraser Brown, who moves to the bench, while second-row Toolis comes in for the injured Jonny Gray.

Harris has been selected ahead of Huw Jones, who drops out of the 23-man squad. Sale Sharks wing Byron McGuigan takes Harris’ place on the bench.

Speaking about the changes, Townsend said: “We believe Chris and Stuart deserve this opportunity. They were very close to the starting XV when we entered this campaign. We think this is the right time for them to come in.

“Chris has been excellent for Gloucester this season and has continued to make improvements since the summer. He works very hard on both sides of the ball, which will be important this week.

“Stuart has shown over the past few weeks he’s back to full fitness and is raring to go and Ben gets an opportunity to start following Jonny’s injury against England.

“Second-row is a position (where) we have a lot of competition with a number of very good players available for selection. We’re looking forward to seeing how he combines again with Scott (Cummings) after a successful outing together against Russia in the World Cup.”

Neither side have won a match in this season’s Six Nations, Scotland losing to Ireland and England, while Italy suffered away defeats to Wales and France.

“Italy are always a very tough opponent, especially in Rome, where we know they’ll look to play with a huge amount of energy,” Townsend said.

“It’s a different Italy team to the one we’ve played in the past. In their opening two games of the championship, they have played with real ambition and width.

“They’ve also selected athletic ball-players who suit this strategy and are comfortable playing at a high tempo.

“We are well aware of the threats throughout their team and how their attacking game can cause problems for any defence.”