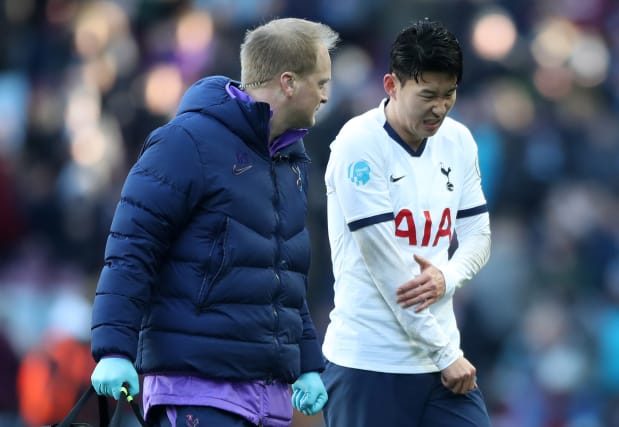 Tottenham’s Son Heung-min is not expected to play again this season after suffering a broken arm in Sunday’s win at Aston Villa.

South Korea international Son completed the 90 minutes at Villa Park and scored twice in the 3-2 victory.

Here, the PA news agency looks at five other notable occasions when sports stars played through the pain barrier.

Former German soldier Trautmann only played in goal for the first time in a prisoner of war camp in Lancashire, but joined Manchester City in 1949 and went on to make more than 500 appearances for the club, his most famous being in the 1956 FA Cup final. With 17 minutes to play, Trautmann dived at the feet of Birmingham’s Peter Murphy and suffered a neck injury, but played on and made crucial saves as City won 3-1. It was discovered three days later that he had actually broken his neck.

Woods has won a total of 15 major titles and two of them by incredible margins of 12 and 15 shots, but perhaps his most remarkable success came in the 2008 US Open. Despite noticeably limping and being in obvious pain, Woods completed 72 holes at Torrey Pines and then defeated Rocco Mediate in a 19-hole play-off. Within days it emerged that Woods had triumphed despite a double stress fracture of his left tibia and an anterior cruciate ligament injury which required surgery that ruled him out for the rest of the season.

The Tour de France is gruelling enough when fully fit, but Thomas inflicted more pain on himself when he insisted on completing the 2013 race despite suffering a hairline fracture to his pelvis during a crash on the opening stage. The Welshman had to be lifted on and off his bike for each stage, but made it all the way to Paris and helped team-mate Chris Froome to the first of his four titles.

Burgess produced a man-of-the-match display for South Sydney in their NRL Grand Final victory over Canterbury Bulldogs in 2014, but it was only later that the true scale of his heroics emerged. Burgess was hurt in a clash of heads with his England team-mate James Graham in the first tackle of the match and was later found to have suffered a fractured eye socket and fractured cheekbone, but played the full 80 minutes.

During the 2010 NHL play-offs, Duncan Keith of the Chicago Blackhawks was hit in the face at close range by a puck which knocked out seven of his teeth. However, after receiving a few minutes of treatment in the locker room, Keith returned to the ice and helped his side beat the San Jose Sharks and advance to the Stanley Cup final. “It’s just missing teeth,” Keith said at the time. “It’s a long way from the heart.”