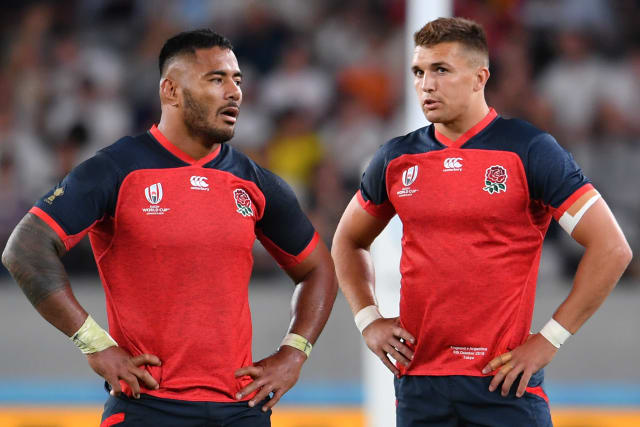 Manu Tuilagi and Henry Slade are winning their fitness battles as England aim to build momentum in their Guinness Six Nations title quest.

The outside centres have been recovering from respective groin and ankle injuries and are on course to be available for Sunday’s pivotal clash with Ireland at Twickenham.

Tuilagi suffered a minor strain in the opening quarter against France in round one and sat out the Calcutta Cup victory over Scotland, with Jonathan Joseph deputising in his absence.

Slade, meanwhile, has not appeared since damaging his ankle in December but was involved in Wednesday morning’s training session at England’s Surrey training base.

Head coach Eddie Jones said: “Manu trained fully so should be in contention for selection. It’s good to have a quality player back.

“Slade also trained so we have just got to monitor his progress. He has a positive chance. He’s a quality player. This gives gives us more options.”

The return of two key midfield personnel has come at a welcome time for England after Ollie Devoto became a doubt for the visit of Andy Farrell’s men to Twickenham because of a back issue.

Tuilagi’s ability to power over the gainline will be especially important against Ireland as Mako Vunipola – another explosive carrier – will miss the clash for family reasons.

Vunipola is returning home, joining his younger brother Billy on the list of absentees with the marauding number eight ruled out for the entire Six Nations because of a broken arm.

In Mako’s absence, Joe Marler and Ellis Genge will fill in as starting and replacement loosehead props.

“Mako’s a quality player but we are lucky we are blessed with two outstanding loosehead props in Joe and Ellis, so we can recover the loss of Mako. But it’s disappointing to lose him,” Jones said.

The scrummaging technique of Ireland prop Tadhg Furlong has been called into question by Wales in the wake of their 24-14 defeat in Dublin and Jones has revealed that England will talk to referee Jaco Peyper in advance of Sunday’s collision.

“The Welsh are entitled to their opinion. We’ll formulate ours and let the referee decide on the verdict.

“Ireland are a good side, extremely well coached and we really respect them. They were well coached by Joe Schmidt and Andy is doing a great job now.

“Ireland are our next game so it’s our most important. We are on track.”