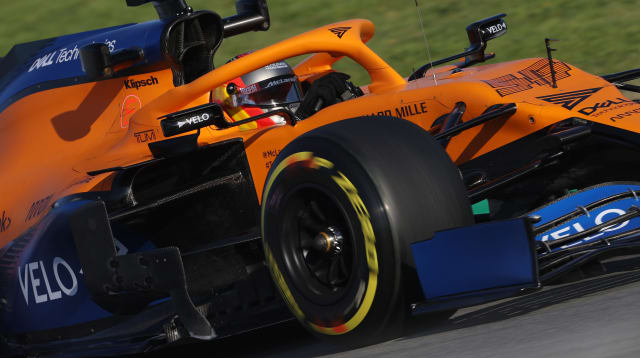 McLaren have placed a ban on people who have travelled from China entering their motorhome at the first Formula One pre-season test.

The British team’s move in Barcelona follows publication of the company’s strict response to coronavirus, which has claimed more than 2,000 lives.

The group-wide policy applies to those who have travelled to and from China in the past fortnight and is also in force at McLaren’s Woking headquarters.

A Chinese journalist, who is a regular fixture on the travelling F1 circus, was informed on Wednesday that he would not be permitted access to the team’s hospitality suite for this week’s first three-day test.

McLaren have also moved to re-route their employees due to travel to Melbourne via Hong Kong for next month’s season-opening Australian Grand Prix. They will instead stop over in the Middle East.

The team’s travel routes for April’s Vietnamese Grand Prix have also been changed. It comes with McLaren postponing non-essential travel to and from Hong Kong, Japan, Malaysia, Korea, Singapore, Thailand and Macau.

Lewis Hamilton’s Mercedes team have amended some of their travel plans in response to the outbreak of the illness.

A spokesperson for McLaren said: “Given the ongoing coronavirus outbreak and based on recent updates to UK government and World Health Organisation directives, the McLaren Group has issued a policy setting out restrictions and conditions we believe prudent to safeguard the health and well-being of our people, contractors and customers and protect our operations across our McLaren Applied, McLaren Automotive and McLaren Racing businesses.

“Among these measures is a precaution that anyone who has travelled from China is not permitted to enter a McLaren Group operated building or facility for up to 14 days.

“We continue to monitor the situation closely and will revise our policy as circumstances change, while working with Formula One and the FIA.”

Coronavirus has already had an impact on the forthcoming season, with F1 bosses postponing the Chinese Grand Prix, which had been due to take place in Shanghai on April 19.

Hanoi, the capital of Vietnam which is set to stage its first grand prix on April 5, shares a border with China, but at this stage there are no plans to shelve the race.

Sebastian Vettel withdrew from the opening day of testing after falling unwell.

The four-time world champion was due to kick off Ferrari’s pre-season campaign at a sun-soaked Circuit de Catalunya but played no part after reporting flu-like symptoms. Vettel, 32, is expected to be back in the car on Thursday afternoon.

In the German’s absence, Hamilton struck an early warning by finishing fastest.

Hamilton, 35, is this year bidding to equal Michael Schumacher’s record with a seventh world championship, and he finished a third of a second clear of Valtteri Bottas in the sister Mercedes.

Red Bull and Max Verstappen are hoping to lead the challenge to Hamilton. The 22-year-old Dutchman ended the day in fourth, 0.540 seconds off Hamilton’s pace. Leclerc was 1.3secs back in 11th.

The first test concludes on Friday, with three further days of running in Barcelona next week. Hamilton will open his title defence in Melbourne on March 15.