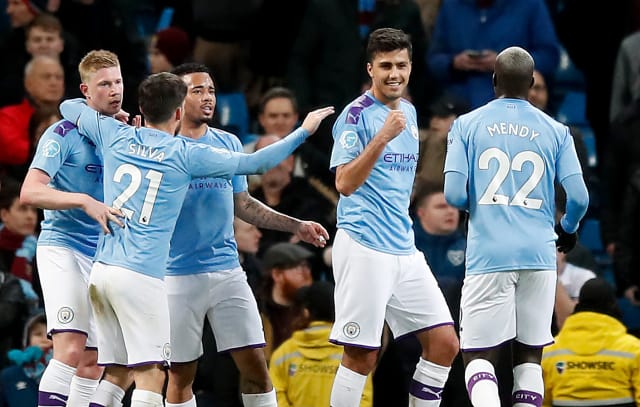 Manchester City can only hope their upcoming fight with UEFA proves as straightforward as a 2-0 win over relegation-threatened West Ham that was far more dominant than the scoreline suggested.

Goals in either half from Rodri and Kevin De Bruyne were the only reward for a display in which City boasted almost 80 per cent possession and had 20 shots at goal.

While the scoreline looked routine this was a Premier League match played with an undoubted edge by the hosts.

Ten days after Storm Ciara forced the postponement of the original fixture, the two sides reconvened but with City now facing an altogether different storm.

UEFA’s bombshell announcement on Friday that City would be banned from European competition for two seasons, and fined £24.9million, for “aggravated breaches” of Financial Fair Play regulations had already brought an aggressive response from the club and the promise of a determined appeal.

City have called UEFA’s process “prejudicial”, and chief executive Ferran Soriano followed that up by insisting the allegations against the club were “simply not true”.

On Wednesday night the fans took their turn. Though the Etihad Stadium was far from full for the hastily rearranged game, those in attendance made their feelings clear, displaying banners decrying the ‘UEFA Mafia’ and singing songs denouncing the European governing body in much cruder terms.

On the pitch players, led by a typically determined De Bruyne, seemed to carry a little extra bite as they chased down every loose ball and simply overpowered a West Ham side now winless in their last seven outings.