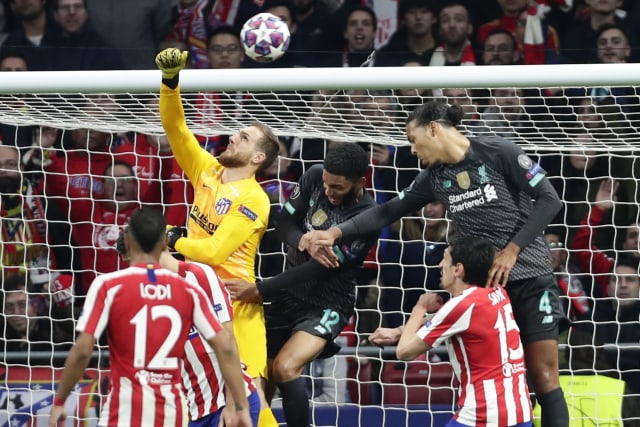 Virgil Van Dijk insists there will be no panic at Liverpool following defeat in the first leg of their Champions League tie against Atletico Madrid.

The holders will need to overturn a 1-0 aggregate deficit when the sides meet at Anfield next month to reach the quarter-finals after Saul Niguez scored the only goal at the Wanda Metropolitano Stadium.

Niguez struck after just four minutes and Atletico then sat back, much to Liverpool’s irritation, to preserve their advantage in what was a dour contest slowed by the home side’s frequent time-wasting and play-acting.

“We knew it was going to be a battle and very tough because they are very organised. You have to be very patient and obviously the goal we conceded doesn’t help.

“But we are halfway through. We are still positive, still confident. We know we are going to have chances.

“I think you have to be confident in your own ability and we will be. We have been so good so far this season.

“It is never nice to lose but we should be confident, not panicking. Obviously we will take plenty of good things from this and do the bad things better.”

The game followed an unfamiliar pattern for Jurgen Klopp’s men, who have won 25 of their 26 games in the Premier League this season and look set to end their 30-year wait for the title.

They dominated possession but failed to have a single shot on target. Mohamed Salah missed their best chance when he headed wide in the second half.

In the end a sloppy start cost them with Niguez poking home as the visitors failed to clear a corner.

Prior to the corner Liverpool had felt Atletico were incorrectly awarded a throw-in but Van Dijk did not make that an issue.

The Holland international said: “I was surprised the ref didn’t see it and I don’t know if the VAR can give that.

“It was unfortunate they scored from a scrappy corner. I thought it was pretty clear but we have to deal with it.”

Liverpool will also have to combat what they felt were delaying tactics and gamesmanship from the Spanish side when they meet again.

Manager Klopp revealed after the game that he withdrew Sadio Mane at half-time because he had been booked and he feared Atletico’s antics could get him sent off.

Van Dijk said: “We know what to expect. Every touch (someone) is sometimes going down and trying to wind us up a bit.

“Sometimes it is difficult to keep the emotions but we had to deal with it. We have to be prepared but at Anfield it could be a completely different game.”

Liverpool are waiting for updates on the fitness of Jordan Henderson after the captain left the field 10 minutes from time with a hamstring injury.