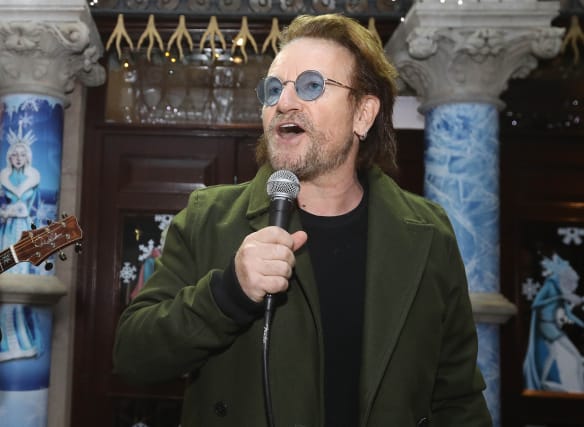 The Dublin-born U2 frontman delivered an impassioned talk as a special guest at the team hotel on Tuesday evening and was photographed serving food to captain Johnny Sexton.

He briefly performed songs from his vast repertoire, as well as speaking to players on a range of topics, including what it means to be Irish.

Ireland head coach Andy Farrell, who comes up against his homeland at Twickenham this weekend, was delighted with the impact of the motivational visit.

“We were blown away that he gave his time up to come over to see us,” said Farrell.

“We invited him in and he was top of the wish list and we got the top, which was unbelievable really.

“He’s quite a private person really but he put a lot of time and effort into being able to answer the questions from the floor in a great manner that we got something out of.

“He’s obviously a proud Irishman, so he talked a bit about Irishness.”

Ireland can clinch the Triple Crown in London following successive wins over Scotland and Wales.

Scrum-half Conor Murray was inspired by the visit of the 59-year-old musician, real name Paul Hewson, while wing Jacob Stockdale believes it can help build the team’s identity.

“It was just cool to hear him talk about his life experiences and how he views the world and you realise what he’s done outside of music and in terms of charity and the people he’s dealt with politically,” said Murray.

“He’s just a huge personality and it was unbelievable to hear him speak, unbelievably intelligent and well-articulated guy. It was just a really cool evening.”

Stockdale added: “Faz (Farrell) wants to give us a bit of an identity and he’s doing that through our training but also through things like speaking to Bono.

“He talked about Irishness and what it means to be Irish and what is special about it.

Ireland have named an unchanged starting XV for the trip across the Irish Sea following their impressive bonus-point success over defending Grand Slam champions Wales on February 8.

The return of fit-again number eight Caelan Doris on the bench, in place of Max Deegan, is the only change to the 23-man squad.

Farrell, who was capped eight times by his country during his playing days, will go head-to-head with son and England captain Owen Farrell on Sunday.

Despite the unusual circumstances, the 44-year-old insists contact between the pair in the build up to the game has been no different.

“I think I’ve spoken to him two or three times,” said the senior Farrell.

While Ireland sit level on nine points with France at the top of the standings, World Cup finalists England are playing catch-up following defeat in Paris on the opening weekend.

Farrell expects Eddie Jones’ men to be fired up as they attempt to salvage their title hopes.

“We’re in a good place, we’re two from two, we know that our performance has to be there to win,” said Farrell.

“England have won one, lost one, so I suppose that this is their championship, so you would say they would have an edge about their game.”