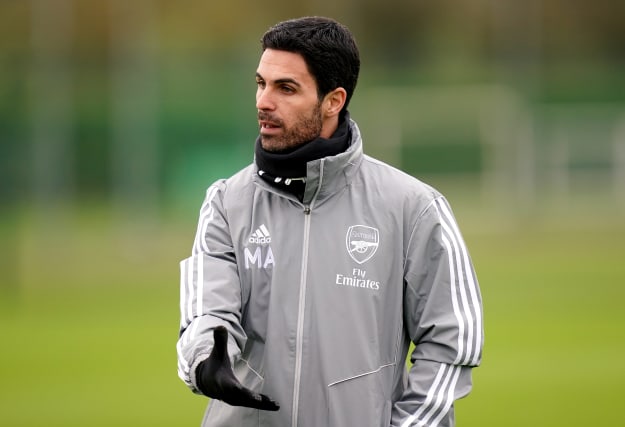 Arsenal head coach Mikel Arteta has challenged his players to rise above the heated atmosphere expected to greet the Gunners when they take on Olympiacos on Thursday.

Arteta will be keen for his side to put themselves into a strong position to continue their Europa League quest with victory in the opening leg of their round of 32 clash against the Greek champions-elect in Athens.

The sold-out Karaiskakis Stadium is often a difficult place for opposing players and, with Arsenal's side containing a number of youngsters, the evening will be a stern test of their resolve.

Arteta is confident his younger players can handle it and wants to see the same reaction regardless of their experience to date.

"It is part of the process," he said.

"You don't know until you expose them. They can have the best intention but they need to go to a stadium like here and when they make a mistake or a bad decision, have the courage to try again and play again.

"And I want to see that in my players, whether they are 17 or 35. That's what I expect from them. If they keep trying, they have my full support.

"If they hide after that, I don't like it. But what I've seen up to now, every time they play on that field they are responding really, really well. That's what I am hoping and I am sure they will do it tomorrow."

While squad rotation in the Europa League has been the order of the day under previous managers Arsene Wenger and Unai Emery, Arteta suggested he make take a different approach.

Arsenal lost to London rivals Chelsea in the final last year and may need to win the competition this time around to return to the Champions League, given they currently sit 10th in the Premier League.

Asked about the intensity of playing Premier League and Europa League games and a potential need to rest players, Arteta added: "That's why we have a big squad and we can rotate the players. But physically in Europe, the game won't be any more demanding than in the Premier League, that's for sure.

"If they have to do that every three days, it can be an issue but as well we have to try to adapt and choose the players that can perform in each game.

"We had a break of 15 days. We played just one game so tomorrow I'm going to send out a team that I think is the best to play. The rest of the game will take care of itself.

"We cannot control everything. Sometimes you think about resting somebody and in training he gets a little issue or he gets sick.

"So tomorrow we will send out a team that we think is the best to beat Olympiacos and the rest of the teams after that will take care of themselves."

It remains to be seen if Matteo Guendouzi will be involved having been dropped for Sunday's 4-0 win over Newcastle.

Reports suggested the midfielder had fallen out with Arteta during the recent training camp in Dubai, with the head coach adding: "I just do my team selection and the squad in regards to how they train, how they play, how they behave.