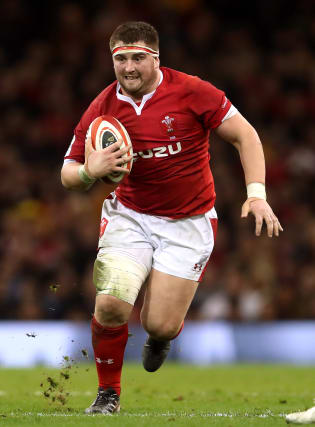 Wales prop Wyn Jones is prepared for a French scrum that will “hit and chase and cheat” when the countries meet in Saturday’s Guinness Six Nations clash.

Jones has not held back in his assessment as France target a first Six Nations win on Welsh soil since 2010.

Asked about the French pack, 24 times-capped Scarlets loosehead Jones said: “They’ll be a big pack, but probably ill-disciplined with that, especially at scrum time.

“We know they will hit and chase and cheat. That’s something we are fully aware of and something we’ve got to combat on the day.

“They will look to push early, they’ll look to mess about at scrum time. That’s something we’ve looked at. We will just concentrate on ourselves.”

Asked for his general view on scrums, Jones added: “In any aspect of the game, all you want is consistency, and maybe some calls are frustrating, but you’ve just got to play what’s in front of you.

“The scrum is constantly evolving. I think we’re all on the same page – that’s the main thing.

“We just keep evolving our scrum. We show positive pictures. That’s the kind of scrum we want. We want to be positive, a ‘no cheating’ mentality.”

Wales have received a double boost ahead of the Cardiff encounter with Josh Adams and Dan Biggar both training fully.

Wing Adams, who has scored 10 tries in his last eight Tests, and talisman fly-half Biggar both went off during the 24-14 loss to Ireland 10 days ago.

Adams took a knock to his hip, while Biggar failed a head injury assessment as Wales suffered a first Six Nations defeat for two years.

But they are on course to be named in Wales head coach Wayne Pivac’s starting line-up when it is announced on Thursday.

Dragons forwards Elliot Dee and Cory Hill, though, have yet to train fully with the squad following injuries, and look unlikely to be involved.

Wales need a quick response following the Ireland setback, and victory over France – one of only two remaining unbeaten teams in this season’s competition – would reignite their title hopes.

Wales assistant coach and forwards specialist Jonathan Humphreys added: “The review (of the Ireland game) has been good. It’s been very honest.

“Some of the contact areas for us were not great. We felt we didn’t play well, but we had loads of opportunities to get into the game and possibly win it.”

Addressing the scrums, Humphreys said: “For us, it’s a massive work in progress. We want to scrummage a certain way, paint really good pictures.

“The consistency of that has been good, but when you are dealing with tightheads who are angling across scrums, it creates problems. It creates instability.

“Someone like (Tadhg) Furlong (Ireland prop) is going to come right across the scrum from left to right.

“The laws are clear. They are very clear that you must push straight. That’s what it says.

“If people were forced to push square, you would have a pushing contest, which everybody wants.

“Hopefully, the referees will get harder and harder on this. I reckon, with that, you get more stability and more of a contest.”

Wales prop Dillon Lewis was penalised at a key attacking scrum in Dublin, and Humphreys added: “There comes that inconsistency for us.

“It’s clearly obvious that Tadhg Furlong has hammered across the scrum. It’s created instability from left to right, but we’ve got to deal with that.

“We dealt with it for most of the game, but the one scrum we had to deal with that, we didn’t and that’s our fault.”

Cardiff Blues back Hallam Amos, meanwhile, has been called into Wales’ Six Nations squad as a replacement for the injured Owen Lane.