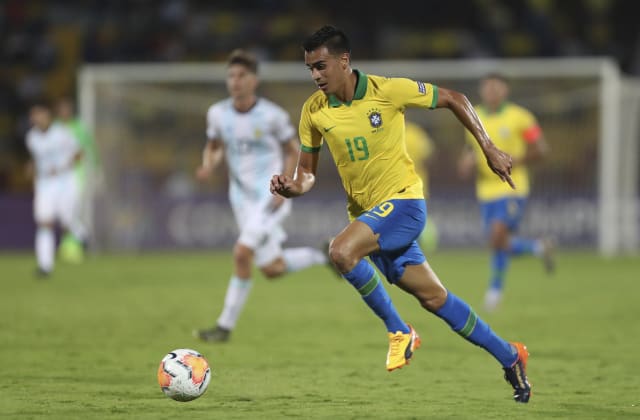 New Real Madrid forward Reinier says he has fulfilled a “childhood dream” by moving to the Bernabeu and is determined to establish himself at the club.

The 18-year-old joined the LaLiga giants last month from Flamengo, signing a six-year deal for a fee believed to be in the region of 30million euros (£24.85m).

The attacking midfielder has captained Brazil at under-17 level and will initially join Real Madrid Castilla in Segunda Division B.

“Today I fulfil a childhood dream. Thanks to my family who was always with me,” Reinier said at his official unveiling, reported by AS.

“We always talked about how amazing it would be to get here. I want to be part of the history of this great club. Hala Madrid!”

Reinier is the latest in a long list of Brazilians to pull on the famous white shirt and is the third to join Real in the last two years.

Fellow teenagers Vinicius Junior, who joined from Flamengo in 2018, and Rodrygo – a 2019 signing from Santos – have both gone on to make their mark in the first team at the Bernabeu.

President Florentino Perez believes the recruitment of the best young talent is a huge part of Madrid’s plan for the future.

“We’re also looking for the best global talent and are hoping to win LaLiga and the Champions League. Real Madrid will never tire to look for the best new talents from around the world.

“It is not easy to find that indisputable talent that can be part of the legend of Madrid. Our players conquered the Spanish Super Cup just a month ago and will continue to give it their all. Here, nobody ever gives up.

“It is our obsession to look for players who can be the great figures of tomorrow. Today comes a player who has just turned 18, but has already been champion of the last Copa Libertadores with Flamengo, one of the great clubs in the world.

“Welcome Reinier, you’re now a player with the club that you used to select when playing video games. You are here on merit, you made your debut at the age of 16 and have won titles with Flamengo.

“We wish you every success with the Real Madrid shirt, this club is now your home.”