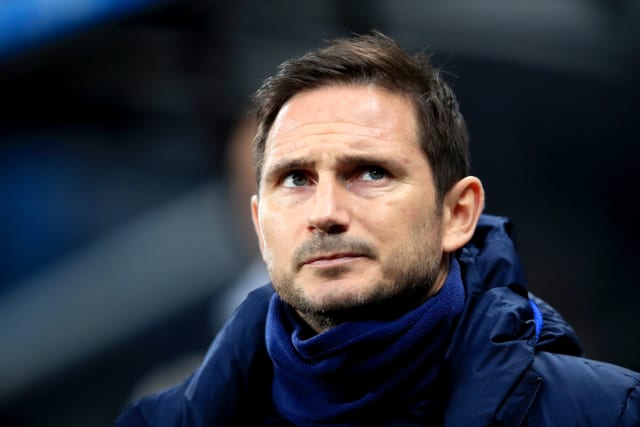 Frank Lampard has declared “the season starts here” in a bid to kick-start Chelsea’s deepening dogfight for a top-four Premier League finish.

The Blues slipped to a damaging 2-0 loss to Manchester United on Monday night, their fifth Stamford Bridge defeat in the league already this term.

Chelsea could have opened up a nine-point gap on the Red Devils with victory, but instead Ole Gunnar Solskjaer’s men cut the deficit to just three points on the fourth-placed Blues.

Jose Mourinho’s Tottenham could even leapfrog Chelsea and push them out of the top four with a win in west London on Saturday, leaving Blues boss Lampard to issue a rallying cry to his Stamford Bridge troops.

“We’re in fourth place by one point, so the season starts here and we need to fight to get fourth place,” said Lampard.

“We’re fourth and it’s still in our hands. I don’t think many people would have put us in fourth place at this point in the season, so the fight starts now.”

Harry Maguire headed home United’s second at Stamford Bridge when the Red Devils skipper arguably should not even have been on the pitch.

The England defender kicked out at Michy Batshuayi but somehow avoided any punishment, with Lampard lamenting the continued variable applications of Video Assistant Referee (VAR) reviews.

“Maguire should get a red card and then he scores the second goal, and the game changes off that,” said Lampard.

“That’s a major part of what VAR was for. The referee can’t see all the angles and if you’re not going to use the pitchside monitor, I don’t understand it.”

Anthony Martial found the net too as United sealed their first league double over Chelsea for 32 years.

Kurt Zouma and Olivier Giroud had goals chalked off on a troubling night for Chelsea, who now face a pivotal run of matches in their quest for Champions League qualification.

Lampard insisted he could not even consider any regrets on the Blues failing to improve their squad in the January transfer window.

“I honestly don’t want to talk about the window because it affects nothing now,” said Lampard.

“The reality is in what we see in front of us.

“Every week we look at the stats and it’s very clear we make as many chances as anyone else bar Liverpool. I don’t want to talk about regrets, the window is past now.”

“Of course we want to be in the Champions League next year, and we’ve given ourselves a chance with this result, but we know that we need to improve,” said Solskjaer.

“We’ve just got to get as many points as possible and hopefully get fourth.”