Blair expects Italy to come up against ‘confident’ Hogg 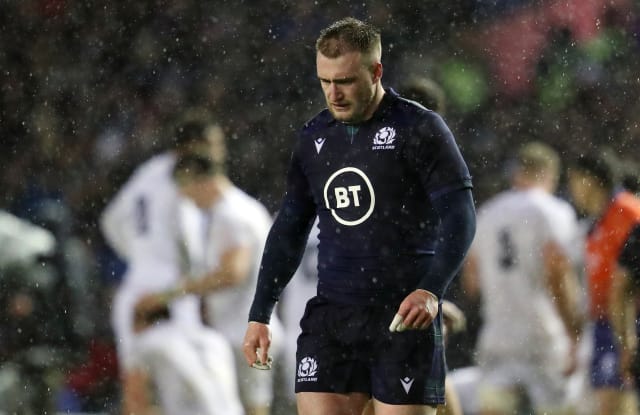 The full-back scored a spectacular first try in the Gallagher Premiership on Friday night to help Exeter consolidate top spot with victory over Gloucester.

Hogg’s basic handling error cost Scotland a try in a seven-point defeat by Ireland and he admitted making another mistake just before England’s only try in their 13-6 Calcutta Cup win as he grounded the ball to concede a five-metre scrum.

Blair said: “I think Stuart has played really well in the games. He has had a couple of unfortunate bits, particularly against Ireland with the try.

“Against England, I don’t think there was a huge amount he could have done in the build-up to their try, because the ball just wouldn’t stop for him. So he had to make a decision on it and we could have defended better in other phases.

“But it was great to see Stuart scoring a try – he made sure he had two hands on it when he touched down and made sure afterwards again.

“He’s a confident guy and he is playing well at the moment, so we expect to see that against Italy as well.”

Hogg assumed captaincy duties just as Finn Russell’s international exile began – Blair confirmed there had been no contact between head coach Gregor Townsend and the stand-off following each party’s media interviews on the subject.

Former skipper Blair said: “There have been a few things to take his mind on but we have been really pleased with how he has done.

“The group around him have helped a lot as well so he can just concentrate on playing and coming in and saying bits and bobs, creating the environment that he wants. We are really happy with how he has been leading the team.”

Blair admitted Saturday’s clash in Rome was huge after a frustrating start.

“I think it’s a must-win,” he said. “We have shown some positives in the first two games but it’s not about how you play, it’s winning games.

“We have shown improvement but we need to get over the line and put some pressure on a really good Italian team.”

Scrum-half George Horne admits the squad are determined to take their chances and ease the pressure on Townsend.

“It’s absolutely must-win,” the Glasgow player said. “We are out to prove a point. We have come off the back of two games we could have won but people have labelled it a typical result for us, being almost there.

“We have 100 per cent confidence in Gregor. The way he is trying to make us play is what suits us, we think. We just need to put together an 80-minute performance rather than 60 or 70 minutes and letting ourselves down with a few mistakes.

“We have to take responsibility as a playing group as well to go out and get results. We have probably done enough to win the two games and we have not done that.”