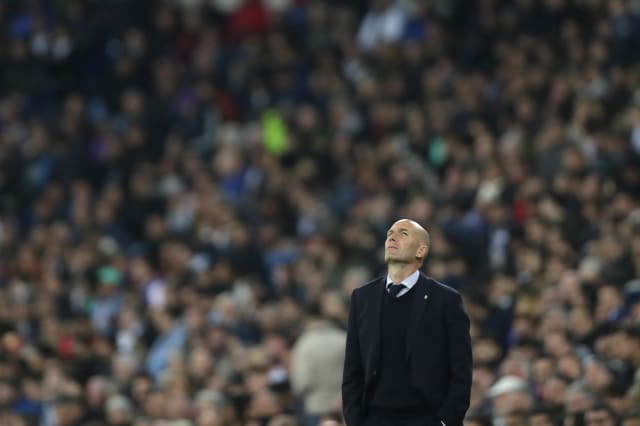 Real Madrid boss Zinedine Zidane rued two points dropped as they were held to a 2-2 draw at home to strugglers Celta Vigo.

Russia striker Fyodor Smolov opened the scoring for Celta inside seven minutes, but Real turned the match on its head in the second half through Toni Kroos’ strike and Sergio Ramos’ penalty.

Celta, who started the evening in the relegation zone, earned the point that saw them climb out of the bottom three as Santi Mina latched onto Denis Suarez’s sublime pass to equalise with five minutes remaining.

The stalemate nudged Zidane’s side one point clear of Barcelona at the top of LaLiga, with their next match at the Bernabeu being El Clasico on Sunday, March 1.

“We’ve dropped two points at home against a good team who don’t deserve to be where they are in the table,” the Frenchman said in a post-match interview posted on their official Twitter account.

“But at the end of the day, we’ve dropped two points at home. It’s not the best feeling because the effort was there.

“We started the match poorly and the first half cost us after the first goal because they closed things up at the back.

“We were better in the second half, we got more into the game and scored two goals. But the game lasts 90 minutes.”

Former midfielder Zidane enjoyed Suarez’s assist for Celta’s second goal, despite the equaliser meaning his side have conceded seven goals in their last three matches in all competitions.

He added: “Instead of talking about the defence, there was a spectacular pass by Denis Suarez (for the second goal).”

Real goalkeeper Thibaut Courtois described the draw as “lost points that are worth a lot at home” as Los Blancos failed to restore their three-point advantage which they had at the start of the weekend over Barca.

“Angry because we conceded a (second) goal,” Courtois told Spanish broadcaster Movistar, which was reported on media outlet AS.

“It was a difficult game because they started by scoring a goal early on. They defended well with 11 men and then I made a good save to keep the score at 1-0.

“Then in the second half, we scored two fast goals but in the end we’ve lost points that are worth a lot at home.

“We defended well but Denis (Suarez) made a good turn and made space for Santi Mina, who put the ball away well. It’s two points lost today and that leaves a bad taste in the mouth.”

Celta boss Oscar Garcia heaped praise on his players for sticking the the game plan and taking a point off the league leaders.

“This point has taken a lot of effort from the players,” Garcia said in a press conference.

“We have shown a lot of character in the second half, and refused to give up. We had two chances and scored both of them, and for that the players deserve a lot of credit.

“We had a plan before the game and stuck to it, and the substitutes have made a big difference in the game.”