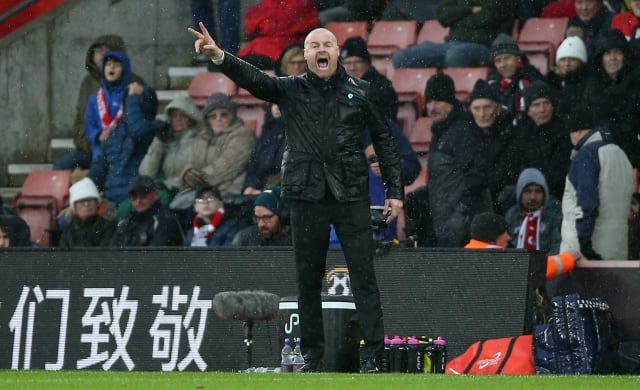 Burnley manager Sean Dyche revealed comments in the Southampton programme boosted the motivation of his players before kick-off at St Mary’s on Saturday.

A superb strike by substitute Matej Vydra clinched a 2-1 success on the south coast to make it three victories from four Premier League games for the Clarets.

It secured back-to-back away wins for Burnley after their shock triumph at Manchester United last month and took them further away from the relegation zone.

At the beginning of January, Burnley were on a poor run of form but have turned things around and silenced the doubters, plus those who have labelled them a “long-ball side” or a team who play “anti-football” as David Luiz insisted last season.

Dyche, when discussing the win, pointed out: “Ironically the (Southampton) programme said Sheffield United have played more long balls than us and yet they are definitely not long balls, but I am not really worried about it and I know Chris (Wilder) is not.

“He will not mind me mentioning that because he is a fantastic fella and look at the job he is doing so he won’t mind me saying that and it was in the programme.

“A good technical analysis in their programme, I quite enjoyed that. I told the lads and said, ‘there you go, that is what they think of you’ and it is always lovely when they give you that little edge to work on. I love that.”

One section of the programme – titled ‘the team talk’ – suggested that opposition “target Burnley’s left, running at Charlie Taylor and crossing, or dragging (Ben) Mee out of the centre to help Taylor, then feeding the ball inside into the space created.”

It was a passage not lost on Dyche, who praised the form of the full-back and pondered if the former Leeds defender could earn an international call-up to the England squad soon.

He added: “I didn’t need to (show the players), they read it and they read the disparaging remarks about Charlie Taylor of all people!

“I think his form has almost been worth mentioning thinking of the national side. Not yet but I think they will certainly be keeping a background check on him and I love that, I don’t know why programmes do it. I love it and it is like fuel. I sit there and think, ‘you beauty’.”

Dyche provided an anecdote about what he used to do before finding the time to flick through the matchday programme of the opposition prior to kick-off.

“The planning is done by the time you sit in the dressing room,” he revealed. “I sit there quite relaxed.

“I used to play Candy Crush and then I changed my phone and I was on level two million or whatever and it went back to the beginning. I was devo (devastated), absolutely devo. A true story.”

Burnley entered the match after a two-week mid-season break, arranged for the first time this season.

On its impact, Dyche said: “We just treated it like an international break, it felt the same. It is probably more useful to the top, super power clubs who are playing in all the competitions.”