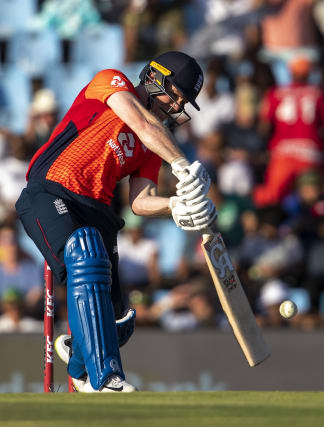 Eoin Morgan carried England to a Twenty20 series win over South Africa as the tourists chased down a 200-plus score for only the second time in their history in the Centurion decider.

Blistering half-centuries from Jos Buttler and Jonny Bairstow had laid the foundations in a mammoth chase of 223 but it was Morgan who got England over the line with five wickets and as many balls to spare to seal a 2-1 victory.

He equalled his own England record for the fastest T20 half-century from only 21 balls in an innings containing no fours but seven sixes as England secured their fifth consecutive bilateral series triumph in this format.

Morgan (57no) may have put the finishing touches to the innings but Buttler justified his retention at the top of the order with a fantastic 57 from 29 balls, putting on 91 with Bairstow, who top-scored for England with 64 from only 34 deliveries.

England had successfully chased down 230 against the Proteas in the World T20 four years ago, and this latest effort lays down a marker for the next global sprint format competition in Australia later this year.

Tom Curran, the hero in England’s series-levelling victory at Durban on Friday, and Ben Stokes took two wickets apiece and were the only touring bowlers to go at less than 10 an over as South Africa racked up 222 for six.