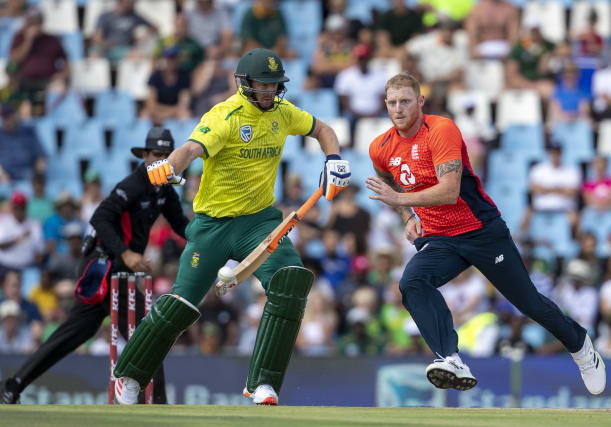 Heinrich Klaasen bulldozed his way to 66 from 33 balls as South Africa set England 223 to win the Twenty20 series at Centurion.

Klaasen’s rampaging half-century and 49 off 24 deliveries from Temba Bavuma helped the Proteas to 222 for six and the second-highest total at the venue.

Tom Curran, the hero in England’s series-levelling victory at Durban on Friday, and Ben Stokes took two wickets apiece and were the only touring bowlers to go at less than 10 an over.

Mark Wood struggled with his lines and conceded an eye-watering 47 from three overs in a deciding encounter where Dawid Malan was brought in for the ill Joe Denly, while Klaasen and Dale Steyn came in for South Africa, who won the toss.

Quinton De Kock had made South Africa’s fastest T20 fifty at Kingsmead but it was his opening partner who burst out of the gates here, Bavuma lacing the first ball off Moeen Ali through the covers after it had sat up.

De Kock struggled against the variations of Curran but would not be subdued for long, greeting Wood’s arrival with a straight six. In all three matches, Wood’s first legal delivery has gone the distance off De Kock.

It was Chris Jordan’s turn to feel the might of the South Africa captain next, clubbed for three successive leg-side sixes, the last of which took South Africa beyond 50 in the fourth over.

Despite Curran and then Jordan stemming the flow with yorkers and pace off the ball, South Africa were still going along at more than 10 an over as they ended the first powerplay on 64 without loss.

The first balls of Adil Rashid and then Ben Stokes were each clattered over midwicket by Bavuma but when De Kock tried to repeat the trick off England’s premier all-rounder, he picked out deep midwicket to depart for 35.

Bavuma was then bowled through the gate, deceived by Rashid’s quicker delivery that slid on, as South Africa’s openers departed within four balls of each other. The hosts brought up three figures at the end of the 10th over.

Rashid was left craning his neck after Klaasen thumped him straight back over his head for six but Rassie Van Der Dussen was unable to make much of an impression as he mistimed a Stokes slower ball to deep midwicket.

Klaasen took maximums off Rashid and Stokes, and when Wood was brought back into the attack, the South Africa batsman went four-six off the Durham paceman to bring up his fifty from only 25 deliveries.

Klaasen’s fun was eventually ended for 66 when he got underneath a Curran delivery but was unable to get any distance, with Stokes gobbling up a steepling catch at mid-off.

David Miller (35no) slapped Jordan high over midwicket before Dwaine Pretorius drove Curran through the covers to bring up South Africa’s 200 in the penultimate over.

Pretorius, on 11, then edged an attempted cut behind off the seamer.

Curran’s figures were spoiled slightly when his last delivery was thumped by Miller for six, while Wood conceded 12 from the final over, and took the wicket of Andile Phehlukwayo, as South Africa ended their innings strongly.