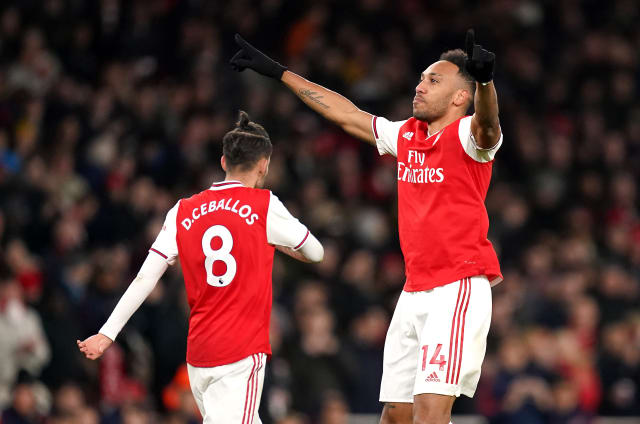 Arsenal continued to show improvement under Mikel Arteta as a second-half blitzing of Newcastle gave them a 4-0 win at the Emirates Stadium.

The Gunners overcame a lifeless first half to turn it into a rout as Pierre-Emerick Aubameyang, Nicolas Pepe, Mesut Ozil and Alexandre Lacazette all found the net, ending the Gunners’ run of four successive Premier League draws.

It was their second win of 2020 and Arteta will be confident his side are now on an upward trend as he tries and implements his ideas.

It turned into an almost perfect afternoon for Pepe, who bagged two assists, produced the sort of contribution that justifies his £72million price tag in the summer, while Ozil scored his first goal since last April and Lacazette ended a nine-game drought.

Newcastle, who set up with five at the back, probably needed to score first, but they had chances to get back into the game, notably through Allan Saint-Maximin’s shot which hit a post.

Having deemed their winter-break trip to Dubai a success, Arteta was hoping the work done will have transferred on to the pitch, but it was Newcastle who enjoyed the early opportunities.

They were nearly the beneficiaries of an own goal when Dani Ceballos diverted Sean Longstaff’s shot, but Bernd Leno was on hand to make a smart save.

Then Joelinton was presented with a golden chance in the 15th minute as Valentino Lazaro’s cross found him in space at the near post, but the Brazilian produced the finish of a man who had not scored in the league since August as he scooped wide when trying an audacious flick.

The Gunners came to life and began to take control of the game, working Martin Dubravka regularly as the goalkeeper saved from Eddie Nketiah, making his first league start for the club, Aubameyang and Pepe.

Joelinton did prove his worth at the other end as he produced an important goalline block to deny Shkodran Mustafi as the Gunners searched for an opener.

With Newcastle playing with a flat back five, the onus was on the Gunners to break them down.

Pepe twisted and turned in the area and pulled back to Nketiah, but the young striker’s 10-yard shot glanced off the top of the crossbar and went over.

The Gunners did not have long to wait before they did go ahead as Aubameyang did the business in the 54th minute.

The 30-year-old was in the perfect place to find the corner with a cushioned header from Pepe’s pinpoint cross.

Pepe enjoyed a golden few minutes as three minutes later he got on the scoresheet to make it 2-0.

This was down to the skill and enterprise of Bukayo Saka, who nutmegged Lazaro and teed up the Ivory Coast international to coolly sweep into the bottom corner.

That seemed like that would be the end of the contest, but on another day Newcastle might have made a comeback.

Only a brilliant block by David Luiz denied Ciaran Clark as the defender somehow missed from close range while Saint-Maximin, whose pace and energy was a threat throughout, struck a post with a curling shot.

The Gunners made sure of it in the 90th minute as Ozil scored his first goal since last April, slotting home from Lacazette’s assist.

The Frenchman also ended a long wait for a goal as he struck for the first time in over two months as he scuffed home another Pepe cross at the death.