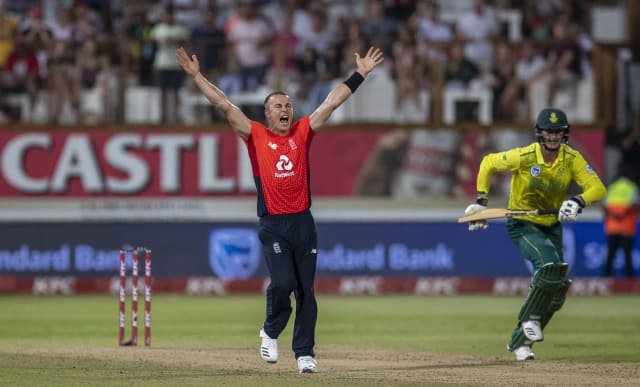 A cameo of 39 from only 11 deliveries from Moeen Ali helped England to a formidable 204 for seven but it was put in the shade by De Kock, whose 17-ball fifty under the floodlights was the fastest by a South African in T20s.

The shell-shocked tourists were grateful when he was caught in the deep for 65 from 22 balls, which included two fours and eight sixes, but Rassie Van Der Dussen and Dwaine Pretorius almost carried South Africa to victory.

Tom Curran was left to defend 15 in the last over and though Pretorius bludgeoned a six then a four, he was trapped lbw and with three needed from one ball, Bjorn Fortuin ramped a slower delivery to Adil Rashid at short fine-leg.

England therefore prevailed to make it 1-1 – having lost at East London in a match that also went to the wire – and set up a decider at Centurion on Sunday.

Having been asked to bat first they were grateful for Jonny Bairstow’s 35 off 17 balls before Moeen thrashed three fours and four sixes, dominating a 51-run stand with Ben Stokes that spanned 17 legal deliveries and 14 minutes.

Stokes finished on 47 not out off 30 balls – remarkably his best return in Twenty20s for England – before taking the catch in the deep that saw off De Kock in a South Africa innings where Mark Wood, Chris Jordan and Curran finished with two wickets apiece.