Daniel Farke calls on Norwich to revel in underdog status 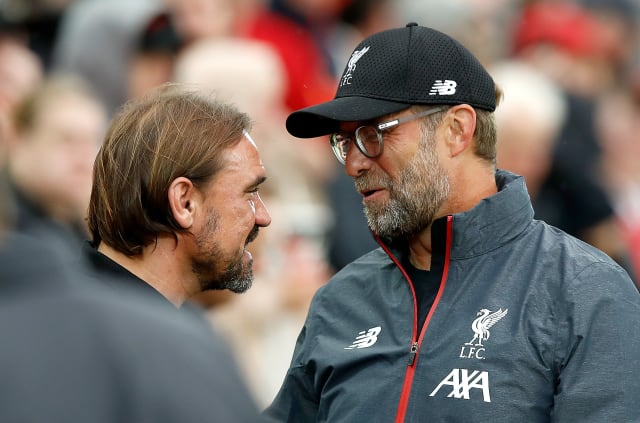 Head coach Daniel Farke wants Norwich to make the most of their “free shot” against Premier League leaders Liverpool to kickstart their survival battle.

The Canaries return from the winter break some seven points adrift of safety at the foot of the table.

Liverpool, meanwhile, seem destined for the title after winning 24 of their 25 league matches so far, and hold a 22-point cushion over Manchester City.

Norwich may have produced one of the early shocks of the season when defeating the current champions at Carrow Road during September, but Farke’s young side have collected just two league victories since that win over City.

With everyone expecting another masterclass from Jurgen Klopp’s men in Saturday’s late kick-off, Farke knows the Norfolk club will be free to tackle the Reds head on.

“There is always hope. Everything can happen in one game,” the German said.

“In 20 games, Liverpool will probably win the most, but our game against Man City showed that when we are good at our topics, we can beat them.

“Liverpool are on fire and the best team in the world. We need an outstanding performance and spirit to have a chance – but if we are (outstanding), then we do (have a chance).”

Farke added at a press conference reported by the club: “It’s like a free shot tomorrow because we have to deliver in the following 11 games.

“It would be great to get one or three points tomorrow but we also want to enjoy it.”

Despite Norwich’s predicament and appearing set for a swift return to the Sky Bet Championship, Farke maintains all is not doom and gloom around Carrow Road.

Left-back Sam McCallum was signed from Coventry ahead of the transfer deadline, with the 19-year-old immediately loaned back to the Sky Bet League One outfit, and promising Sochaux midfielder Melvin Sitti will also join up with Norwich next season.

“The future is quite bright,” said Farke, who also brought in experienced German Lukas Rupp on a permanent deal from Hoffenheim and Slovakia winger Ondrej Duda on loan from Hertha Berlin.

“Many people appreciate that we don’t lose our nerves and risk the future of the club.

“When you can spend £20milllion on defenders and strikers it gives you a bigger chance of surviving, but we want to create something special with our opportunities.”