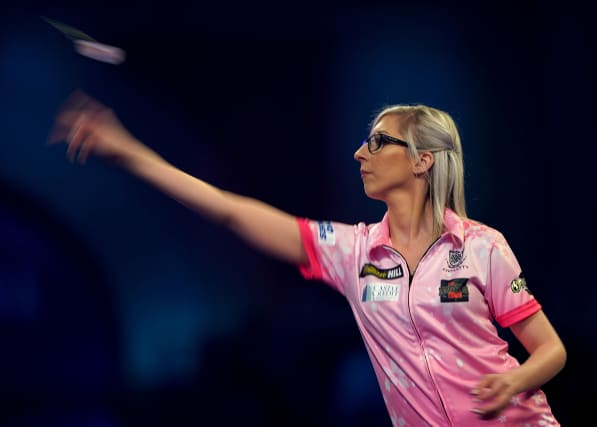 Fallon Sherrock’s five-year-old son can suddenly enjoy school now his mum has become one of the most talked about sportswomen in the country.

Sherrock has burst onto the scene following her groundbreaking exploits at the PDC World Championship in December.

The 25-year-old from Milton Keynes became the first woman to ever win a game at the prestigious Alexandra Palace tournament before going on to oust 11th-seed Mensur Suljovic.

It catapulted her into worldwide fame – gaining support from Hollywood A-listers – and changed her life forever as she has turned her back on a career as a mobile hairdresser.

Her son Rory’s life has also changed as his mum works hard to provide a better life for him.

“It has changed a lot,” Sherrock, whose next big step is to feature as a challenger in the Premier League in Nottingham, told the PA news agency.

“I am away pretty much every weekend now, but I have got a good family support around me which they help with Rory when I am away and I have him in the week and I am away at weekends.

“It has changed quite a bit, but I am doing the best I can at the moment to get as much as I can for my little boy and our future.

“He understands I am going away to play darts but he doesn’t understand how big this has actually got.

“He is just seeing me on the TV and he is like, ‘Oh are you on the TV again’.

“All of his friends are like, ‘Oh your mummy is on telly again’, and he just sits there all smug. He loves it, he has been a big support.”

Sherrock is not the only woman making waves in the sport as Lisa Ashton has also made history, becoming the first female to win a PDC Tour card.

The 49-year-old, who lost in the first round at the World Championship, is not getting anywhere near the same level of coverage as Sherrock, but is widely considered to be the most consistent female player.

And Sherrock believes a new rivalry with four-time world champion Ashton could develop if both women can continue their form.

“Yeah, probably a rivalry could develop,” she said.

“It is great to have another lady because it just proves that us women can compete against the men. It just gives us more opportunities now.

“The sky is the limit now, us women are showing that we can beat men and hopefully it will open more doors.

“She is just as good as me and she deserves everything she gets. If I could share these opportunities, I would.”