Sky is the limit for record-breaking darts star Fallon Sherrock 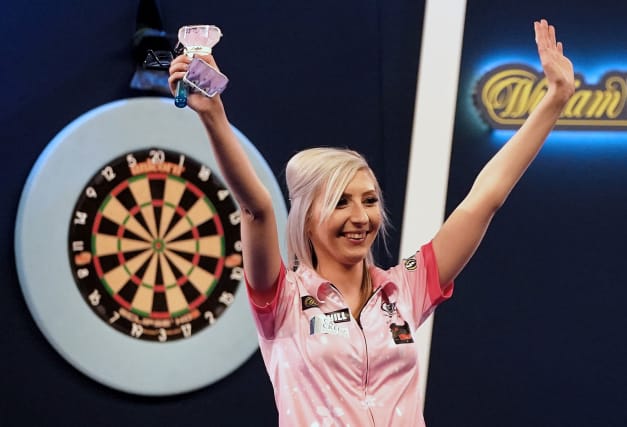 Groundbreaking darts player Fallon Sherrock is convinced she can one day become world champion as her incredible rise continues.

The 25-year-old from Milton Keynes shot to fame with her exploits at the 2019 PDC World Championship, where she became the first woman to win a match at the famous Alexandra Palace tournament.

Life has not been the same since as she is now a staple on the exhibition circuit and in regular demand for interviews.

The next step in her journey sees her compete in the Premier League at Nottingham on Thursday, where as a challenger she will take on Glen Durrant in a one-off match.

Sherrock’s career is only heading one way – having also qualified for the UK Open – and she is not putting a limit on how far she can go.

“The sky is the limit,” she told the PA news agency. “I haven’t set myself any goals or targets because I am taking each day as it comes.

“But who is to say that I can’t be a world champion, or do anything that I put my mind to?

“My next step is to try and win more games on TV or the opportunities I have got. Then obviously, trying to get the tour card and getting into the World Championship again.”

The former mobile hairdresser sometimes has to pinch herself at how life has changed since that crazy week over the festive period.

She has built up a big following, including Sex and the City star Parker, who said she watched Sherrock in “astonishment”.

“The last six weeks have been very busy. It has pretty much been non-stop. I get recognised more when I am walking around the shops and stuff. It is exciting.

“It definitely has been an amazing experience.

“I never expected people like that to reach out to me, I am still getting disbelief about it that they contacted me.”

Parker is unlikely to be watching on Thursday, but she will have the full support of Nottingham’s Motorpoint Arena.

Her opponent Durrant, in his maiden Premier League campaign, has admitted he is dreading the match.

The 49-year-old is expecting to be heavily booed every time he is on a finish, but Sherrock hopes that is not the case.

“The crowd are amazing, I appreciate all the support they give me, it has been amazing,” she said.

“With Glen, he just plays the board and he doesn’t take much notice of the surroundings anyway.

“I am not sure what the crowd are going to do, I would appreciate it if they didn’t boo, but I can’t stop it.

“The male players have just been the same with me. They are all gentlemen and respect me still, nothing has really changed, they are just supportive.

“I am just going to take it as another game of darts, that is what I did at Alexandra Palace.

“I am just going to play my own game and not think too much of it and see how it goes.

“Hopefully I can put on a good performance. The past couple of weeks I have learned how to ignore the expectation and focus on what I have got to do, so I am hoping that I can just focus on the game.”