Rodgers believes Barnes’ form can put him in England contention 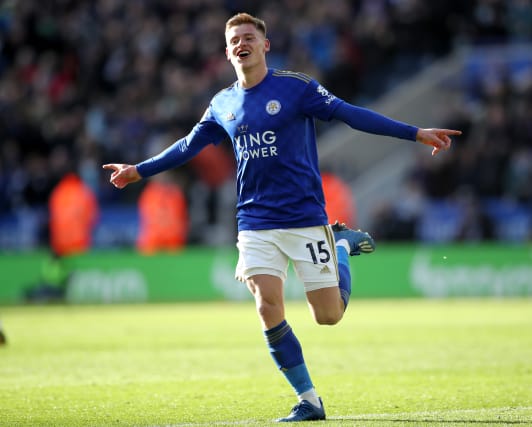 The in-form wideman is reportedly in the thoughts of Three Lions boss Gareth Southgate ahead of the Foxes’ trip to Wolves on Friday.

Raheem Sterling, Harry Kane and Marcus Rashford are all injured to force Southgate to consider his options ahead of friendlies with Italy and Denmark next month.

Barnes, an England Under-21 international, has scored four goals in his last six games for Leicester and Rodgers feels he can make the step to the seniors.

He said: “Any young player who is English and in the Premier League, I’m sure Gareth will be interested in.

“You see Harvey’s progression and development and he was outstanding against Chelsea, up against Reece James who is top-class young right back.

“It’s so pleasing to see, he works hard, he’s a calm boy, very stable, very focused and will only get better.

“I’m sure if he keeps it up over the next number of months and years he’ll be very close to that squad.”

Leicester are third in the Premier League with a 10 point gap to fifth place Sheffield United.

They will return to second with victory over Wolves with Manchester City not playing their rearranged game with West Ham until next Wednesday.

Ryan Bennett is unavailable under the terms of his loan from Wolves so cannot make his debut and Nampalys Mendy is struggling with a knee injury.

Wilfred Ndidi is also a major doubt as he continues to recover from a knee problem.

Meanwhile, Rodgers is already reportedly looking ahead to next season having been linked with Liverpool’s Adam Lallana.

The midfielder, who Rodgers signed at Anfield, is available on a free transfer in the summer.

Rodgers added: “Adam’s a fantastic player. Someone I brought into Liverpool and I’ve been aware of his talent since he was a young player at Southampton.

“He’s done brilliantly there and I’m sure he’ll be weighing up his options but for us we don’t need to speak about that now.

“We’ve spoken about transfers all January and we don’t need to talk about summer ones now but he’s a top class player.”