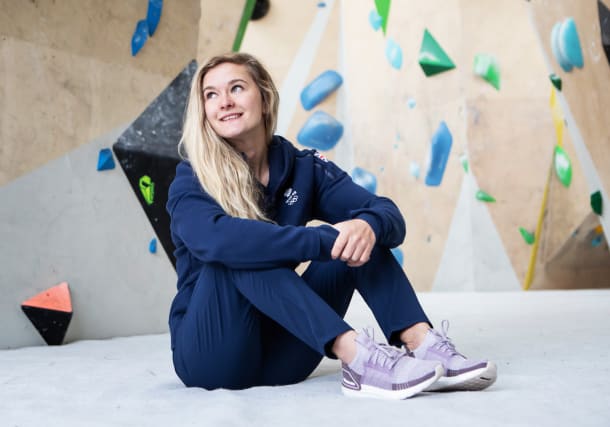 Shauna Coxsey shivers at the prospect of emulating her illustrious Olympic climbing  predecessors after being named in the Great Britain team for the sport’s modern-day debut at this year’s Games in Tokyo.

Almost a century has past since a British team led by Brigadier Charles Bruce were awarded gold medals at the 1924 Winter Olympics for alpinism, in recognition of three gallant attempts to conquer Mount Everest in the preceding years.

Arguments continue over alpinism’s former status as a full Olympic discipline, and the competitive climbing event which has been introduced to the programme 96 years on bears next to no resemblance to its mountaineering predecessor.

Staged at the Aomi Urban Sports Park, the climbing competition in Tokyo will consist of a single competition each for men and women, with medals awarded for their cumulative totals over three disciplines – speed climbing, bouldering and lead climbing.

Coxsey’s reluctance to clasp on the crampons and follow in the Brigadier’s footsteps is hardly surprising given she hails from Runcorn, whose highest point is Halton Castle at a less-than-dizzying 328 feet.

“I’m really glad I do an indoor sport,” admitted the 27-year-old former two-time bouldering World Cup winner, clutching a mug of hot tea on a distinctly alpine-looking morning in the suburbs of Sheffield.

“I do occasionally climb outside but I don’t do any mountaineering. I don’t really like walking very much, or being cold, so I think Tokyo is going to be perfect for me.”

Coxsey had been introduced to climbing by the super-human feats of Frenchwoman Catherine Destivelle, whom she watched on television scaling cliffs without a safety rope in Africa.

“I was sat on my dad’s knee and I pointed at the TV and said, ‘I want to do that’,” recalled Coxsey. “He took me to the local climbing wall and it started from there.

“We had no background in climbing and we’re a bit of an exception in that respect because my dad actually took up the sport after me.”

The Olympic format was initially criticised by many in the sport as too heavily contrived, in particular the inclusion of the speed element in which climbers are timed as they scale a set 12-foot wall.

Coxsey – whose previous success has been in bouldering, which involves the scaling of a number of fixed routes on a 4m face – added: “The event as a combination of our three competitive disciplines has never really existed before.

“Normally an athlete would concentrate on just one discipline, so when it came out there was a lot of upset in the community. But I have loved learning new things and I think the format is really going to underline the best of our sport.”

Interest in climbing has increased exponentially in Britain in recent years, with its domestic governing body, the British Mountaineering Council, estimating that there are now over one million individual visits to climbing walls annually.

Team GB’s deputy Chef de Mission Mike Hay believes the introduction of the sport could have a similar impact to the excitement which greeted the inclusion of snowboard and freestyle disciplines in recent Winter Games programmes.

Hay told the PA news agency: “We know the International Olympic Committee want to engage with the youth and bring sports into the centre of the cities, and this kind of urban sport is really exciting.

“Not everyone is always initially supportive, but I think we’ve seen with freestyle and snowboarding that it’s changed now, and they understand it is their opportunity to be in front of a global audience.”