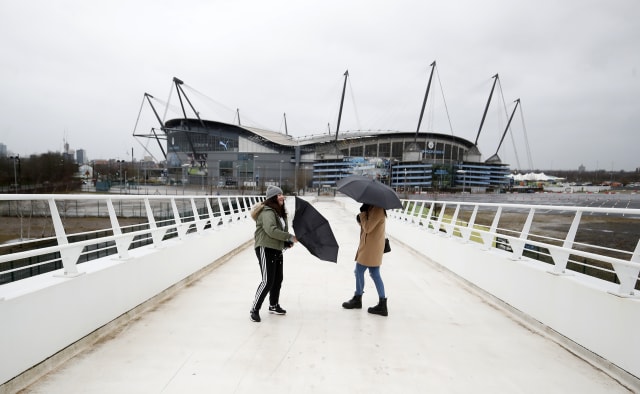 Wakefield have been unable to rearrange their Super League clash with Catalans Dragons for Monday night.

The match was postponed on Sunday because of Storm Ciara but the club had hoped to take advantage of Catalans being in the UK and reschedule immediately.

However, on Monday morning Wakefield announced this would not be the case, saying on Twitter: “The game will NOT take place today and will be rearranged for a later date in the season.

“Please note that all tickets will be valid for the rearranged game. A big thanks for your patience over the last 24 hours.”

Wakefield chief executive Michael Carter had tweeted on Sunday afternoon: “Just to bring everybody up to date, because Catalans are in the country and to avoid fixture congestion, we are looking at tomorrow evening but at this stage it is still extremely doubtful.”

The Super League game between Huddersfield and Leeds was also postponed, and leading sport administrators must strive to rearrange a slew of fixtures that were called off on Sunday.

Winds up to 85mph battered the UK and Ireland, leading to football, horse racing, rugby union and rugby league fixtures being scrapped, and now the race is on to rejig schedules as quickly as possible.

Race meetings at Exeter, Southwell and Punchestown were all abandoned, and Tuesday’s meetings at Ayr and Lingfield have also been called off because of waterlogged tracks.

Ayr’s clerk of the course, Graeme Anderson, tweeted on Monday morning: “We had 16 millimetres of rain overnight, which makes it 51mm since 5pm on Saturday. We have a further 10-15mm forecast, along with 50 miles per hour winds, so it isn’t going to improve.”

There was good news from Plumpton, though, with Monday’s card getting the go-ahead after passing an inspection.

Scotland Women’s Six Nations clash with England in Glasgow was postponed on Sunday, and the Scottish Rugby Union swiftly announced the encounter had been rescheduled for Monday afternoon in Edinburgh behind closed doors.

An SRU statement read: “Weather conditions in Edinburgh on Monday will not be as severe as Glasgow but still forecast as challenging so the game will not be open to the public or have tickets on sale.”

Non-league Wisbech Town, meanwhile, have potentially been left with a serious long-term problem after a stand at their Fenland Stadium collapsed due to Storm Ciara. The total cost of repairs at the Cambridgeshire side’s ground could be more than £20,000, according to the club secretary.