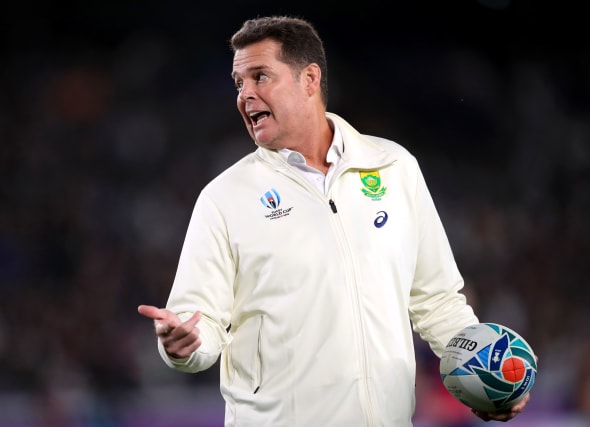 The Rugby Football Union denies holding talks with Rassie Erasmus over the possibility of him succeeding Eddie Jones as England head coach.

A report in a South African newspaper states that Twickenham is exploring the option of recruiting Erasmus, the mastermind of the Springboks’ World Cup triumph last autumn.

The 47-year-old was present at Murrayfield on Saturday as England overcame Scotland 13-6 in the Guinness Six Nations, relieving pressure on Jones in the wake of successive and comprehensive defeats.

The first of those was to Erasmus’ South Africa in the World Cup final, when England were crushed 32-12 a week after overwhelming New Zealand.

Jones is contracted to remain Red Rose boss until July 2021 and while his future beyond then is uncertain, an RFU spokesman told the PA news agency that “we strongly dismiss this story”.

Both Jones and RFU chief executive Bill Sweeney have declined to outline publicly the succession plan for when the Australian does step down, or whether he will still be in place at the next World Cup in 2023.

Erasmus is currently acting as South Africa’s director of rugby but his success in Japan just 18 months after being parachuted in to rescue the Springboks from an alarming slump has made him a sought-after appointment.