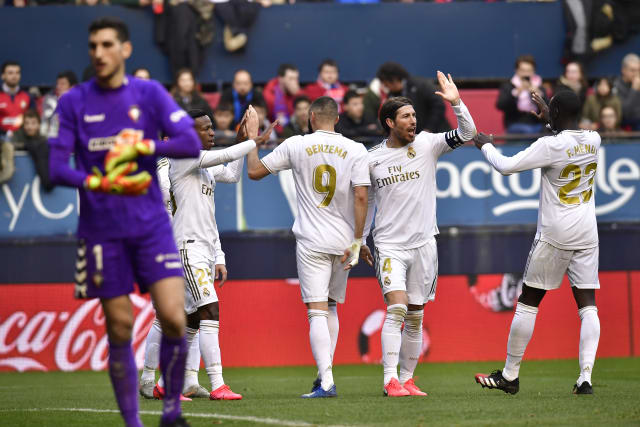 Real Madrid fought back from a goal down to win 4-1 at Osasuna and at least briefly extend their lead at the top of LaLiga to six points.

Zinedine Zidane handed Gareth Bale his first league start in over a month and he played 71 minutes of a victory inspired by first-half goals from Isco and Sergio Ramos.

Lucas Vazquez and Luka Jovic added gloss to the scoreline with late strikes and Madrid can now sit back and watch how Quique Setien’s Barcelona fare against his old club Real Betis later on Sunday evening.

Osasuna were excellent in the opening exchanges and were rewarded in the 14th minute when Ruben Garcia found his namesake Unai Garcia, who headed in.

It was the first goal Madrid had conceded on the road in LaLiga since December 15 and they remained on the ropes for a while, but eventually responded in Pamplona with Bale’s influence growing.

The Welshman played a role in the leveller with 33 played when he saw a shot deflect into the path of Isco and the midfielder volleyed home with aplomb.

Five minutes later and the turnaround was complete when Zidane watched Ramos head home from a corner.

Luka Modric’s cross was nodded across goal by Casemiro and Madrid’s captain was on hand to score his 90th goal for the club.

It remained 2-1 at the break and no further goals were forthcoming straight after the interval despite Rueben Garcia going close.

Zidane made his first change with 19 minutes left, with Bale making way not long after David Garcia had received a yellow card for hauling down the former Tottenham attacker.

Vazquez replaced Bale and made his mark in the 84th minute when he fired home after good work by Karim Benzema.

Madrid were home and dry now, but their was still time for substitute Jovic to net his second goal in Blanco and wrap up an excellent day for the LaLiga leaders.

Zidane’s team have now gone 14 league games without defeat to reach the summit and move into a position of control in the title race.