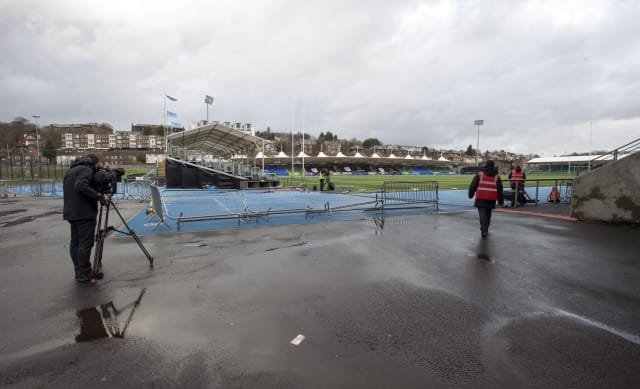 City announced at 11.15am that “extreme and escalating weather conditions” had forced the postponement.

The game at the Etihad Stadium had been due to kick-off at 4.30pm.

“Due to extreme and escalating weather conditions and in the interests of supporter and staff safety, today’s match has been postponed,” said a statement on the official Manchester City website.

“This decision has been made by Manchester City’s safety officer following consultation with club stakeholders and officials at West Ham United.

“Further information regarding the rescheduling of today’s match will be published in due course.”

Football, horse racing, rugby union and rugby league fixtures were all postponed with 85 miles per hour winds set to hit to Britain.

Sunday’s two Super League games between Huddersfield and Leeds and Wakefield and Catalans Dragons were postponed.

A group of fans had been walking from Leeds’ Headingley ground to the John Smith’s Stadium in Huddersfield to raise money for former Rhinos player Rob Burrow.

The entire Women’s Super League programme was called off, including derbies between Arsenal and Tottenham and Everton and Liverpool.

“Our fixture against @SpursWomen at Meadow Park today has been postponed on the grounds of crowd safety, due to extreme weather conditions,” Arsenal Women posted on their official Twitter account. Please do not travel to Meadow Park.”

The north London clash was a sell-out and the Merseyside derby was due to attract a 20,000 plus crowd to Goodison Park.

“The adverse weather conditions including high winds on Merseyside, caused by Storm Ciara, have made travelling to the match and the area around Goodison Park dangerous.

“The decision to postpone the fixture was made by club officials in conjunction with FA WSL’s match anager, match officials, safety experts on the grounds of the safety of both sets of supporters.”

Other WSL games between Manchester United and Chelsea, Bristol City and Reading, Birmingham versus Reading and West Ham and Manchester City were also postponed, as were the Championship games at Charlton, Coventry, Crystal Palace, Durham and Lewes.

Rugby union was also hit as the Women’s Six Nations match between Scotland and England at Scotstoun was postponed.

Wind speeds of up to 70 miles per hour were forecast after the 12.10pm kick-off.

A Scottish Rugby spokesperson said: “It is very disappointing to have to take this decision but given the extreme weather conditions and with supporters, players and staff safety being paramount it’s the correct decision.

“We will always put safety first. I’d like to apologise to fans for any inconvenience Storm Ciara has caused and we will update them with more information on the rescheduling on the game.”

The Greene King IPA Championship game between Yorkshire Carnegie and Ampthill at Emirates Headingley Stadium was another rugby casualty.

All three race meetings in Britain and Ireland were abandoned.

Exeter was first to be called off, shortly before a scheduled 8am inspection, and then Southwell’s all-weather meeting and Punchestown’s Grand National Trial card followed around an hour later.

At Punchestown, it was initially hoped the high-profile fixture would survive – but after almost 30mm of further rain on Sunday morning, it was cancelled too.

A statement from Exeter read: “Unfortunately Racing today has been abandoned.https://content-wordpress.pressassociation.com/wp-admin/post.php?post=3407647&action=edit#

“Wind speeds have reached unacceptable mph gusts this morning, and our localised forecast predict this to continue for the remainder of today, affecting our racing operation, public safety and grandstand areas.”

Plumpton has announced a precautionary race-day inspection at 8am for the card there on Monday.

The storm conditions extended to Europe where the Dutch Eredivisie and Belgian Pro League and the Belgian second tier postponed their fixtures.

Dutch champions Ajax saw their trip to Utrecht postponed, while Alan Pardew’s ADO Den Haag had their game at Sparta Rotterdam called off.

The Bundesliga in Germany was also hit as the Rhine derby between Borussia Monchengladbach and Cologne fell victim to the weather.