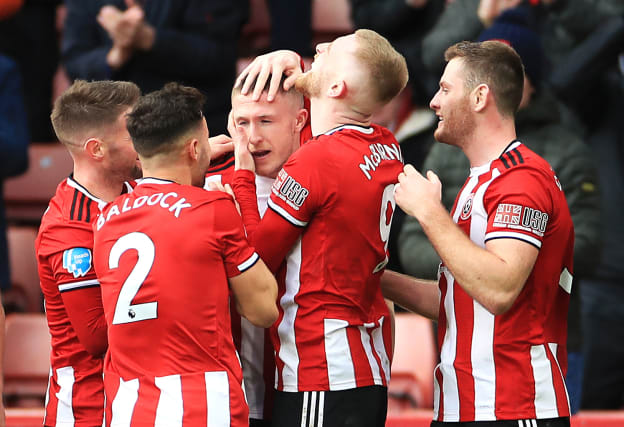 John Lundstram’s late goal kept Sheffield United in the hunt for European football as it sealed a 2-1 win against Bournemouth.

The substitute struck with six minutes remaining to move the Blades up to fifth in the table and to within two points of Chelsea, who occupy the final Champions League spot.

It looked like the match was destined for a draw after Billy Sharp cancelled out Callum Wilson’s opening goal for the visitors in the first half.

Chris Wilder remains on course to guide the Blades to their best-ever finish in the top flight – sixth in 1975 – while Bournemouth are just two points above the relegation zone.

United were the first to threaten but it was Bournemouth who made the better start. Cherries captain Simon Francis, the only survivor from when these teams last met at Bramall Lane in 2012, made a brilliant block to deny John Fleck after two minutes.

Wilder’s side lived dangerously as a handful of attacks down the left caused them problems, with Nathan Ake and then Harry Wilson both heading the ball wide.

Callum Wilson hooked an effort wide from close range, before the Blades’ luck finally ran out after 13 minutes.

Club-record signing Sander Berge was at fault, giving possession away to Andrew Surman deep inside his own half. Another raid down the left caused panic in the penalty area and after Harry Wilson’s shot was blocked, Callum Wilson was on hand to fire the rebound into the roof of the net.

Bournemouth could have immediately doubled their lead. Ryan Fraser’s cross from the left just evaded Callum Wilson and Philip Billing, though the latter will feel he should have made contact with it.

Wilder’s team composed themselves and went about getting themselves into the game after an uncharacteristically poor start to the match.

A teasing cross by Enda Stevens was just out of the reach of Sharp, who at full stretch and from a tight angle could only send the ball into the side netting.

Just after the half hour mark Ake’s block took the sting out of Oli McBurnie’s shot, allowing former Blade Aaron Ramsdale to make a routine save.

The hosts were building up a head of steam and finished the first half by putting their opponents under some intense pressure.

The Cherries survived a series of corners, scrambling the ball clear and making last-ditch challenges. Oliver Norwood saw a deflected strike drop agonisingly wide of a post before Ramsdale made a fine save to keep out McBurnie’s header.

However, Bournemouth were breached in first-half stoppage time as the Blades’ endeavour was finally rewarded. A corner was kept alive by Stevens, who drilled a low cross back into the six-yard box where John Egan turned the ball goalwards. His shot was blocked but the ball fell nicely for Sharp, who was on hand at the far post to poke home.

It was the Blades captain’s first goal since scoring on the opening day of the season in the reverse fixture at Bournemouth.

Wilder’s side tried to pick up where they left off at the start of the second half and Sharp forced Ramsdale into a block at his near post shortly after the restart.

The same sort of pressure did not materialise, however, and the visitors were able to stem the flow of attacks while remaining dangerous on the counter attack.

Ake hooked an effort wide following a corner before a thunderous strike from Fraser inside the penalty area brought a superb save from Dean Henderson.

Mousset made amends by setting up Lundstram in the 84th minute, with the midfielder beating Ramsdale with a calm, composed finish into the bottom corner.

Ake could have snatched a point for the visitors in stoppage time but he headed wide.