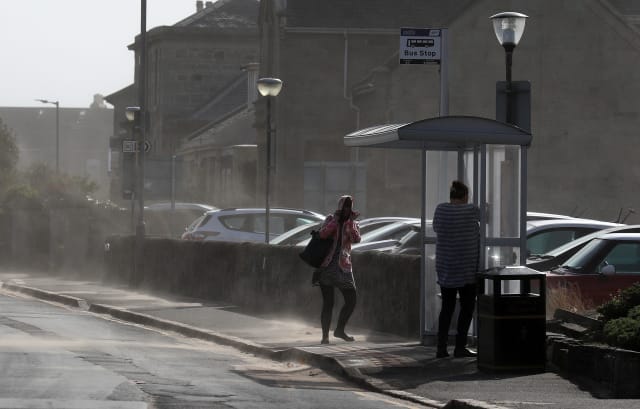 The sell-out Women’s Super League north London derby between Arsenal and Tottenham was one of the first fixtures to fall victim to the weather.

“Our fixture against @SpursWomen at Meadow Park today has been postponed on the grounds of crowd safety, due to extreme weather conditions,” Arsenal Women posted on their official Twitter account. Please do not travel to Meadow Park.”

Other WSL games between Bristol City and Reading and Birmingham versus Reading were also postponed, as were the Championship games at Charlton, Coventry, Crystal Palace and Lewes.

All three race meetings in Britain and Ireland were abandoned because of the high winds and rain sweeping the British Isles.

Exeter was first to be called off, shortly before a scheduled 8am inspection, and then Southwell’s all-weather meeting and Punchestown’s Grand National Trial card followed around an hour later.

At Punchestown, it was initially hoped the high-profile fixture would survive – but after almost 30mm of further rain on Sunday morning, it was cancelled too.

A statement from Exeter read: “Unfortunately Racing today has been abandoned.

“Wind speeds have reached unacceptable mph gusts this morning, and our localised forecast predict this to continue for the remainder of today, affecting our racing operation, public safety and grandstand areas.”

Plumpton has announced a precautionary race-day inspection at 8am for the card there on Monday.

The storm conditions extended to Europe where the Dutch Eredivisie and Belgian Pro League and the Belgian second tier postponed their fixtures.

Dutch champions Ajax saw their trip to Utrecht postponed, while Alan Pardew’s ADO Den Haag had their game at Sparta Rotterdam called off.

The Bundesliga in Germany was also hit as the Rhine derby between Borussia Monchengladbach and Cologne fell victim to the weather.