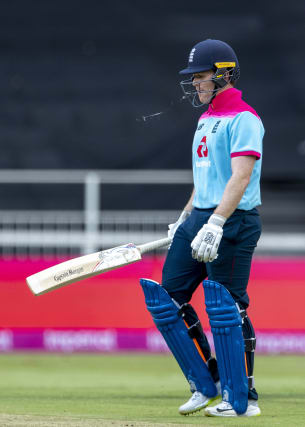 Eoin Morgan wants to see more “ruthlessness” from England after they crept over the line against South Africa at Johannesburg as the one-day international series finished all square at 1-1.

Chasing a modest 257, Jonny Bairstow’s rampaging 43 from only 23 balls allowed those below him in England’s order to bat at their tempo, with Joe Denly (66) and Joe Root (49) putting the tourists firmly in the ascendancy.

But the departure of Denly saw a cluster of wickets fall as England slipped from 232 for four to 252 for eight and in danger of collapsing in a heap before Moeen Ali’s unbeaten 17 sealed a two-wicket win in the 44th over.

“It was disappointing to limp over the line. Ideally we would have chased it four or five down. We would have liked to win commandingly,” England captain Morgan said at the presentation ceremony following the third and final ODI.

“We showed a lot of promise but we need to develop our ruthlessness.”

Adil Rashid had earlier taken three for 51 on his 100th ODI appearance and first since last year’s World Cup final as South Africa were restricted to 256 for eight after being asked to bat first.

The leg-spinner carefully managed a shoulder injury during the triumphant World Cup campaign and the months after that proved challenging for the Yorkshireman, who credited gym work with aiding his rehabilitation.

“It’s nice to bowl some overs,” Rashid said. “I’ve not bowled much for the past six or seven months due to my shoulder injury but it was nice to get out there, play with the boys and ultimately get a win.

“Probably five or six months ago, when I was playing through it, I didn’t have that same snap, I just had to find a way through it.

“I was probably 50 per cent in the World Cup and the New Zealand (Twenty20) series but I had two months off where I really hit the gym hard and did a lot of rehab.

“There was a period where I thought, ‘Will I ever get that snap back? Will I be able to bowl my best?’ There was that worry but putting the hard work in the gym has definitely paid off.”

One of the talking points of the ODI came when Rashid was given an lbw verdict against Temba Bavuma, who seemed to squander a review.

However, an inability to access UltraEdge led to unforeseen consequences for England off the very next ball as Rassie van der Dussen was reprieved.

Amid much confusion, the umpires decided to give South Africa back their review, which allowed Van der Dussen to overturn an lbw decision off Rashid – although it barely mattered to the outcome as the batsman was soon dismissed.

“That was actually quite confusing, especially because of that wicket… I was looking forward to a hat-trick ball,” Rashid said.

Rashid has been linked with a Test comeback for next month’s series in Sri Lanka, where he took 12 wickets at an average of 28.16 as part of a highly successful three-prong spin attack alongside Moeen Ali and Jack Leach in England’s 3-0 whitewash in November 2018.

However, when asked whether he would countenance being included in the squad, Rashid replied: “Probably not. It’s something that I personally feel I’ve got to earn again.

“I’ve got to go back into county cricket, get the performances under my belt and then get selected on merit.

“If the selectors do ask me, ‘If you are available, can you play?’ it would be a straight ‘No’. I feel as though I’ve got to deserve my place back in the team.”

South Africa head coach Mark Boucher bemoaned their batting display, which was compounded by allowing Bairstow and Jason Roy to put on 61 inside the first six overs.

Boucher said: “We lost too many wickets when we just started getting a bit of momentum going, probably 30 or 40 runs below par. With the ball we started off really, really poorly, and we were playing catch-up after that.

“When you’re 30 or 40 runs short you’ve got to bowl well, especially up front, and you’ve got to take opportunities and we didn’t do that – it’s why we lost.”