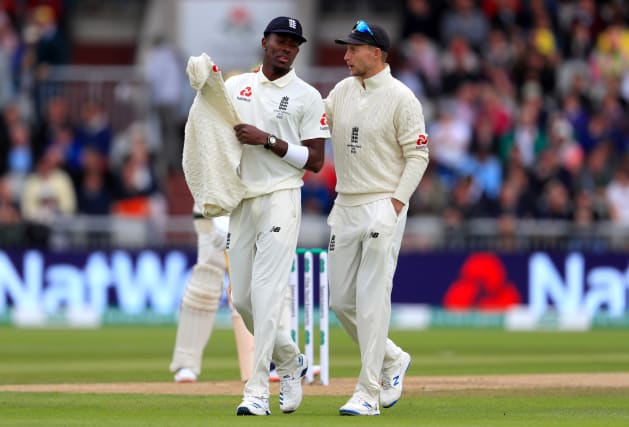 England Test captain Joe Root defended his use of Jofra Archer after the paceman was ruled out for around three months with a low-grade stress fracture of his right elbow.

Archer first felt pain in the area at last year’s World Cup and despite England insisting the injury was carefully managed, he bowled more overs than any of his international team-mates in 2019, despite making his debut in May.

Questions were asked of Root when Archer bowled a mammoth 42 overs in his first overseas Test against New Zealand last November and have intensified since the 24-year-old missed the last three Tests of the South Africa series.

An initial scan in South Africa showed no major damage but this can often be the case with this type of injury. Only when the swelling had gone down did Archer undergo a more sophisticated scan.

That involved injecting dye into the joint to show inflammation, and the results showed that Archer will miss next month’s two-Test trip to Sri Lanka as well as the Indian Premier League.

He had a prominent role in both the IPL and Big Bash League in Australia before embarking on an international career which has so far yielded a World Cup winner’s medal and three five-wicket hauls in seven Tests.

Root said: “I wouldn’t say he’s been over-bowled. You look at the amount of cricket he’s played before he played for England, he’s played a huge amount, and he came into international cricket and took the world by storm.

“He’s had a phenomenal start on the international stage and should be extremely proud of what he has achieved already in his short career. It’s pretty full on if you’re playing all three formats.

“One of the pleasing things is we are actually really clear on what the injury is now.

“We’re all gutted for him missing out, but it will be good for him to have a mental break to get some time away from the game, to get refreshed.

“We’ve just got to make sure now from the position we’re in we build him up very well from the start of the summer and make sure when that first opportunity for him to play comes he’s absolutely ready to go.”

Root’s more immediate priority is as part of Eoin Morgan’s relatively inexperienced one-day side, who are looking to avoid a first bilateral series defeat in the format in three years.

They currently trail 1-0 to South Africa ahead of Sunday’s decider, after their heavy seven-wicket defeat at Cape Town was followed by an abandonment at Durban after 11.2 overs because of intermittent downpours.

The forecast at Johannesburg, where both South Africa and England will wear a limited-edition one-off kit to mark the hosts’ annual pink day initiative, is not too promising.

Root said: “It’s disappointing to be sat here in the position that we are. We were well under par in the first game and probably not as good as we would have liked in Durban in the small bit that we did play.

“So we’ll be keen to bounce back pretty strong.”

Root is one of the few World Cup winners to have featured in this series and because England have selected only Matt Parkinson as a specialist slow bowler so far, the Yorkshireman’s part-time off-spin has come to the fore.

He has not disappointed either, bowling South Africa Quinton de Kock in both his innings.

Root joked: “I’m sure he’ll get me at some point but it’s nice to get him twice in the series so, yeah, I’ll claim as my bunny for sure!

“I’ve enjoyed having the opportunity to bowl in this series. I definitely think it’s something that adds to my game and adds to the team.”

Root is not a part of the squad for the three T20s that follow the ODI series, and he admitted: “Being honest, looking at the squad there is at the minute and the players that are performing around the world in T20 competitions, I’m probably not in the best XI.

“For that reason I’m being left out and that’s part and parcel of cricket.”