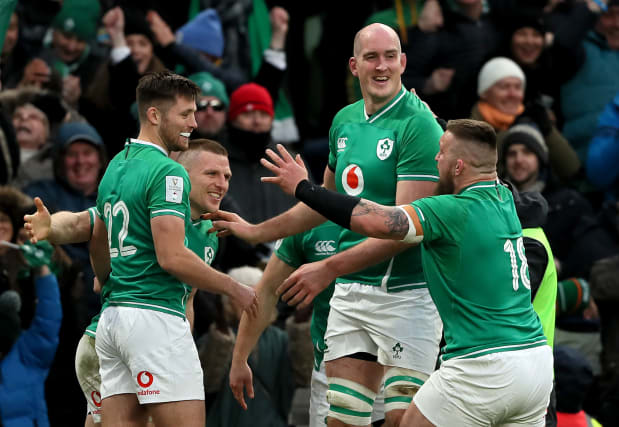 The dominant hosts tamed the Grand Slam champions in Dublin and deservedly ran in four tries to secure a 24-14 bonus-point success and move top of the championship table.

Farrell’s reign had begun in stuttering fashion with a narrow win over Scotland seven days ago and he was delighted by the emphatic nature of a second successive victory at the Aviva Stadium which keeps his side on course for a Grand Slam.

“It was an improved performance. The start was the complete reverse to last week,” said Farrell.

“We were a little bit passive at the start of the game last week.

“I thought there were some heroic moments last week – especially in those moments we had to dig deep to win the game – but I thought we got that 100 per cent across the 80 minutes today.

“We managed that game superbly, especially in the second half. And to score a bonus-point try was really pleasing.”

Defeat for Wales was a first in this tournament since losing on the same ground two years ago and a maiden loss for their new head coach Wayne Pivac.

Fly-half Dan Biggar added the extras to a sharp Tomos Williams score to briefly put the visitors ahead at 7-5, while Leigh Halfpenny converted a consolation touchdown from flanker Justin Tipuric in added time.

Englishman Farrell is adamant there is still more to come from his squad and believes they are in a “great place” ahead of their meeting with Eddie Jones’ World Cup finalists.

“Well, look, we’ll enjoy tonight,” he replied when asked about the trip to Twickenham.

“We have a couple of weeks together and there’s a lot of learning that needs to be had.

“I think we’re in a great place. We’ve had two wins. We said it wasn’t the brilliant performance that we were all looking for last week but we had a great week’s preparation and good, honest feedback from the boys.

“But we know the boys sat there in the changing room after a bonus-point win knowing there is still plenty more in us.”

Wales briefly thought they had found a way back into the encounter in the second half but a try from Hadleigh Parkes was ruled out on review after he was adjudged to have lost control of the ball.

Having begun the competition by easily dispatching Italy, they produced a stuttering display littered with mistakes and could have no complaints about the result.

New Zealander Pivac admitted his side paid the price for an “unacceptable” number of handling errors.

“Going into the changing room at 12-7, we felt if we continue to work hard in defence but then got some territory ourselves and possession that we could turn the game around,” said Pivac.

“Clearly we didn’t start as well as we would have liked after half-time – inaccuracies in their 22 and we let them off the hook a couple of times.

“We’ve got to be very accurate in our passing game and I think today we put about eight balls down, turned the ball over eight times through handling, so that’s unacceptable at this level of the game, something that we will need to go away and work on.

“And just generally too many turnovers when we were in good positions on the field, so you’re not able to build that constant pressure, which Ireland were able to do when they scored a couple of their tries.”

The visitors, who host France in a fortnight’s time, also lost in-form wing Josh Adams to a hip problem in the first half, while Biggar was forced off with a head knock.

“It is a tournament and we’ve got another three games to look forward to,” he said.

“Certainly we’ll be working very hard to make sure that we get the areas right that we need to, so we can put on a better performance next time around.”