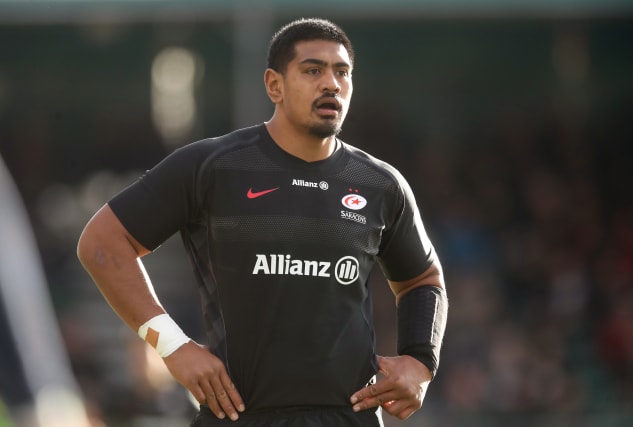 Saracens escaped with a 50,000 euros (£42,500) fine after admitting they fielded an ineligible player in their Heineken Champions Cup match against Racing 92 last month.

An independent disciplinary committee deemed the fine – half of which is suspended – was sufficient after accepting the situation occurred due to an administrative error.

Saracens played prop Titi Lamositele in the match despite the United States international’s work permit having expired on the day before their 27-24 victory at Allianz Park.
.

It had been suggested that the reigning European champions faced being thrown out of the competition, having already been relegated from the Premiership due to salary cap breaches.

Although there was no precedent for this sort of administrative error, French club Grenoble were heavily punished for fielding an ineligible player against London Welsh in the 2012-13 European Challenge Cup.

Grenoble, who won the game 20-9, were deducted four match points as London Welsh were awarded a 28-0 victory.

Saracens finished second in their Champions Cup group last month to secure an away quarter-final at Leinster on April 4.

But had the victory against Racing, which pushed Glasgow Warriors out of the final Champions Cup quarter-final spot, had been overturned, or if Saracens had been docked at least two match points, then they would have been out of the competition.

However, the independent disciplinary committee chairman, Roger Morris, said in a statement on Friday night: “Following careful consideration of a complaint involving a player who has been contracted to Saracens since 2014, and who remains contracted to the club, the committee believes that this was an unfortunate sequence of events brought about by an administrative oversight.

“However, Saracens are in breach of the Disciplinary Rules of the Heineken Champions Cup, and that breach constitutes misconduct which can be proportionately dealt with by way of a financial penalty.”

News of Saracens’ continental lifeline emerged at the same time as they were falling to a 28-7 defeat to Sale Sharks in the Premiership Rugby Cup semi-finals.

And afterwards the club’s senior academy coach Adam Powell refused to be drawn on the implications of the decision, insisting it had no effect on their latest setback on the pitch.

Powell said: “The hearing was a good result of course, but as far as the lads are concerned and their reaction, they probably don’t even know about it yet.”

Powell admitted his side, who grabbed their only score with 20 minutes remaining through Rotimi Segun, had been up against it.

“It was tough because Sale had a very experienced team out there,” said Powell.

“On any given day they are one of the best defensive teams in the league and that was no different here.”