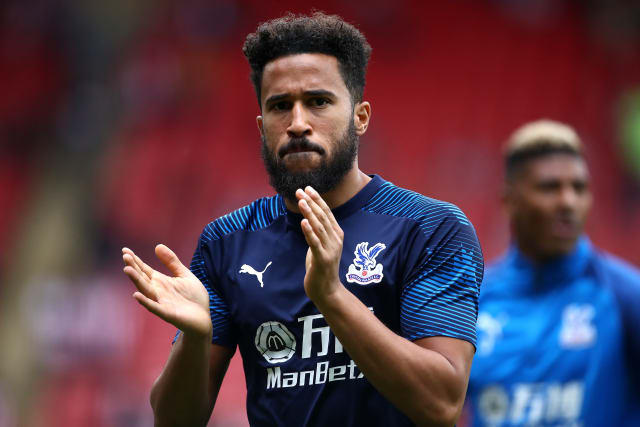 Crystal Palace winger Andros Townsend has revealed how an open and honest conversation with manager Roy Hodgson helped him rediscover his form as he battled personal issues.

Townsend opened up in The Players’ Tribune in December about his past struggles with a gambling addiction, admitting he had hit “rock bottom” before getting caught by the FA – he was fined and suspended for four months in June 2013 – and then subsequently getting counselling.

The England international said that help “not only saved my football career, it also probably saved me as a human being”, and the 28-year-old is now encouraging others to talk as part of the Heads Up mental health campaign.

Every men’s and women’s team from the top flight to the National League in England are to dedicate their matches to the campaign on February 8-9 and February 15-16.

As part of launching the initiative, the Duke of Cambridge sat down with Townsend, Watford forward Troy Deeney, Manchester United midfielder Scott McTominay, Wycombe striker Adebayo Akinfenwa and former Arsenal player Kelly Smith for a game of Jenga – with a difference.

Drawing on their own personal experiences on and off the football pitch, the players shared personal anecdotes as they opened up about how they manage pressure.

They discussed with the Duke the importance of talking and why mental health should no longer be a taboo subject.

Townsend recalled how a talk with Palace boss Hodgson, someone he also worked under in the England national team, played a pivotal role in the midfielder’s return to form.

He said: “The manager pulled me into his office a few months ago, and he just asked me: ‘how are you feeling? How are you doing?’

“I was out of the team and playing poorly. He could see in training I was not my usual self.

“I was honest with him, and said: ‘listen gaffer, I am struggling at the minute. I am trying really hard, but it is really getting to me’.

“He just said: ‘Andros, we believe in you. I have believed in you for many years and I know eventually you are going to get out of this state you are in’.

“For me that was the best thing I could have been told at that time. The next game I came on and scored, and I was back in the team within a few weeks. Something so little as a five-minute conversation goes a long way.”

Townsend added: “If you keep bottling things up, it eats away at you.”

“In past years it was perceived as a weakness, if you said ‘I am struggling a bit mentally,’ then it was ‘oh, he is not up for it, up for the fight,'” Deeney said.

“Now there is so many people speaking on the subject that people go ‘oh, we know, we can see the effects’.”

During the film, the Duke of Cambridge reflected on how having often difficult conversations can provide a positive outcome.

He said: “Part of this is all about just being more open about how we feel and just being able to talk about those feelings and everyone not shying away.

“Actually we’ve got to be a bit more punchy and say, ‘how are you doing?’ and ‘do you want to talk a bit more about that?'”

:: Fans are encouraged to visit HeadsTogether.org.uk/Heads-Up for tips on how to #KickOffAConversation about mental health.

Sterling has improved thanks to Guardiola – Villa