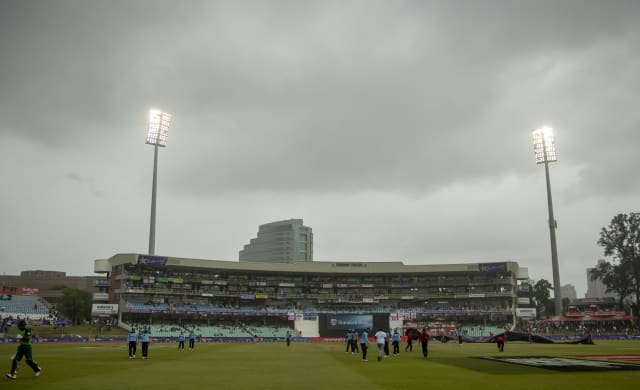 England’s bid to level the one-day international series against South Africa was dashed by intermittent rain at Durban as only 11.2 overs of play were possible before the match was abandoned.

The tourists suffered a comprehensive seven-wicket defeat in the series opener earlier this week at Cape Town, where Quinton De Kock’s ton and an innings of 98 from Temba Bavuma were significant factors in South Africa’s win.

While the pair were dismissed cheaply in two brief windows of action in the second ODI, it was of no consequence as South Africa reached 71 for two before another downpour led to an abandonment at 7pm local time (5pm GMT).

The no-result at Kingsmead means England must prevail at Johannesburg on Sunday to avoid a first ODI bilateral series defeat in three years.

Their hopes of coming from behind to win the series are now over, though, after the inclement weather had the final say.

The falling rain led to a delayed start of nearly two hours and, when play did get under way, it was announced the match had been shortened to 45 overs per side, with an unchanged England winning the toss.

South Africa made one change from Newlands as uncapped slow left armer Bjorn Fortuin replaced fast bowler Lungi Ngidi, a decision which may have born fruit had the match gone on as spin accounted for the only wicket to fall.

Chris Woakes induced the edge of De Kock only to see the ball fly through a vacant third slip region but Root was able to make the breakthrough, bowling the left-handed opener for the second time in as many innings.

Shuffling back and attempting to cut, De Kock (11) was cramped for room by one that skidded on with the arm, his swipe finding only fresh air as the ball thudded into the stumps. It was the third time on this tour De Kock has been out to the part-time off-spinner.

Reeza Hendricks (35 not out) had earlier taken two fours in three balls off Sam Curran before crunching Woakes effortlessly through the covers – defying a desperately slow outfield to claim his third boundary.

It proved the final act of the first passage of play, the players coming off the field after 6.3 overs and a little over half an hour, after which followed a near three-hour delay on a stop-start afternoon for ground staff.

A successful 6pm inspection led to a quick restart with the match now 26 overs per side. However, it proved all too fleeting for those in attendance.

Bavuma thrashed Tom Curran over midwicket for six in an entertaining cameo of 21 from 17 balls which was ended when he was lbw after being struck on the back pad by Chris Jordan, the original not out decision overturned on review.

But as England were awaiting the third umpire’s call, the rain started to fall once again just 20 minutes after the players had come back out.

It was initially thought play could continue but the shower turned heavier, leading to an abandonment shortly after.