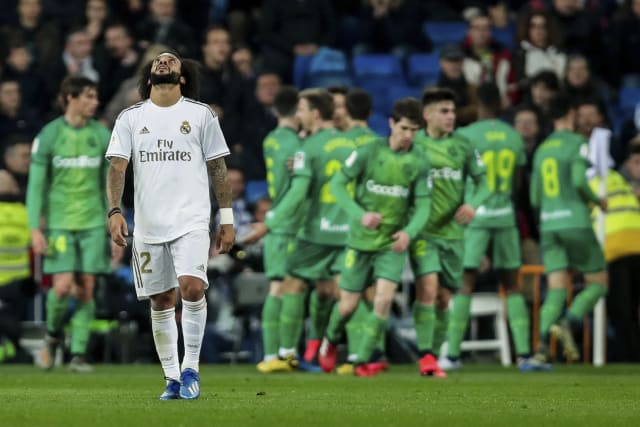 Real Madrid coach Zinedine Zidane offered no excuses after the LaLiga leaders were dumped out of the Copa del Rey following a 4-3 home defeat by Real Sociedad.

Los Blancos had been on a 21-match unbeaten run across all competitions.

However, a team showing seven changes from the win over Atletico Madrid came up short as Sociedad battled to a well-deserved triumph to book their place in the semi-finals.

“This is football. Things have not gone as we wanted,” Zidane told a post-match press conference.

“It was a complicated game, but we tried until the end and the reaction was good.

“Despite losing 1-4, we have fought until the end, but it has not been possible.

“We must congratulate the opponent and also accept losing.”

On-loan midfielder Martin Odegaard – who is set to spend two seasons at Sociedad – put the visitors ahead against his parent club after 21 minutes.

Two quick goals from Alexander Isak early in the second half did the damage and, although Marcelo pulled a goal back, Mikel Merino swept in a fourth.

Vinicius saw a header ruled out by VAR, before substitute Rodrygo reduced the deficit and Nacho set up a dramatic final few minutes of added time.

Sociedad had defender Ander Gorosabel sent off for a second caution before Los Blancos captain Sergio Ramos had a header saved.

Zidane felt defensive mistakes had cost his team, but maintained there were still plenty of reasons to be positive going forwards.

“We don’t have to change anything. We have to keep working and fighting,” the Real Madrid coach said.

“There are complicated games in the season and we have played against a rival that has deserved the victory.

“We are not going to change anything we want to do. Losing is always painful and nobody likes it, but you have to accept it.

“Elimination hurts, we have to tell the truth, we don’t like defeat, but we have a game on Sunday (at Osasuna) and we’re going to focus on it.

“You have to recover from a big effort. We have to continue, there is no choice.”

Zidane made no apologies, however, for his squad selection, which again found no place for Wales forward Gareth Bale while the likes of Brazilian midfielder Casemiro were rested.

“Others have played and fought. It is what had to be done with those who were able to play,” Zidane said.

Sociedad coach Imanol Alguacil hailed the efforts of his team after the club reached the semi-finals of the Copa del Rey for only the second time in 32 years.

“I am very proud and satisfied with a victory like this, in a stadium like that, with such young players able to give this level of performance,” he said.

“We have done something beautiful and important. It will not be easy what remains, but there is still the jackpot (of winning the trophy) and we will go for it.”