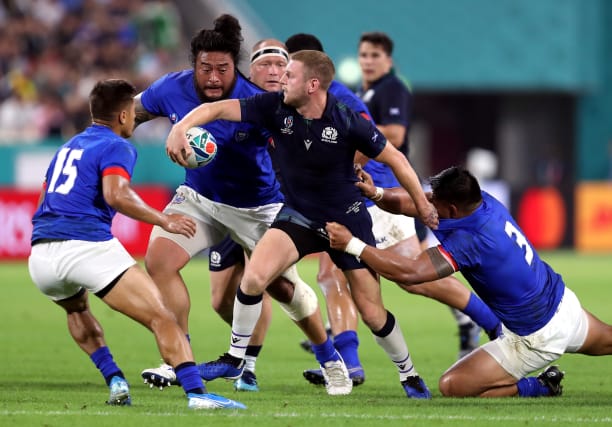 Finn Russell has been told he will have to wait until Scotland have dealt with England before Gregor Townsend decides whether to welcome the stand-off back into the Dark Blues fold.

But the national team boss refused to divulge just what it will take for the Racing 92 star to earn back his trust.

Russell was stood down from action in Dublin last weekend after breaching team rules with a late-night drinking session in the build-up to their Guinness Six Nations opener with Ireland.

Townsend spoke with the 26-year-old the day after his side’s 19-12 defeat at the Aviva to inform him he would be left-out again for Saturday’s visit of the Auld Enemy, with Adam Hastings instead given the job of picking apart Eddie Jones’ Red Rose outfit.

With rumours of discord between head coach and talisman over tactics, there are no certainties Russell will feature again this campaign.

But Townsend says he will worry about situation later as he instead focuses on the more pressing matter of working out how to extend his side’s two-year unbeaten run against the English.

He said: “I spoke to Finn on Sunday night to let him know that we wouldn’t be making any changes to our squad. I will reassess things after we get through this weekend.”

Asked if it was a ‘positive conversation’, he quickly clarified, saying: “It was a conversation and it was telling him he wasn’t going to be back in the squad this week.

“We will look at things next week.

“Yes of course (he could feature before the end of the Championship). Just in the same way there’s a possibility that Sam Skinner and Matt Fagerson, guys who’ve been out who’ve been out injured but will hopefully be back in the next couple of weeks.”

Townsend was then pressed on what exactly was required of Russell to seal a return to the squad but quickly shot down the questions.

“I’d rather not discuss that as we have a big game this weekend,” he said. “I want to be talking about the players who are involved in that game.”

Jones has been happy to talk about the Scots this week, however.

The out-spoken Australian branded Townsend’s team “niggly” and accused them of trying to “goad” opponents.

Northampton flanker Lewis Ludlam ramped up the pre-match rhetoric when he promised Scotland a “war” fuelled by hatred on both sides.

Townsend is not the type to get sucked into the mind games but was happy to agree that this weekend’s Calcutta Cup clash is the most important of the year for his side.

The Scotland coach, who has recalled Edinburgh back-rower Magnus Bradbury to his starting XV, said: “The media must love his comments. It’s a very important fixture for both teams on the back of a defeat.

“This is the most important fixture that we play every year.

“We play for a trophy, it’s the oldest game in the history of Test rugby and we know what it means to our supporters if we win this game.

“It’s nice that there’s a bit of spice about the build-up. “Rugby is a contact sport so you have to get yourself fired up for that contact.

“We know England are a very physical team, there game is based on a few things but the number one is winning gain line in attack and defence.

“We know we have to be even more physical than we were last week to win this game.”